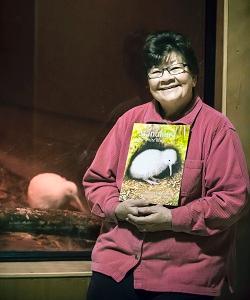 Like many famous New Zealanders before her, Manukura - the rare white kiwi who made global headlines when she hatched in May last year - now has a starring role in her own book.

The book will add a new chapter to Manukura’s already celebrated life, and the little bird will be on hand for the launch this week (3.10.2012) which will take place at her home - Pukaha Mount Bruce wildlife reserve, in the Wairarapa region of New Zealand’s North Island.

The launch event will include readings by the author who plans to donate royalties from book sales to kiwi conservation.

The book is also scheduled to go later this month to the Frankfurt Book Fair.

Manukura - all-white kiwi
The first known white kiwi bred in captivity, Manukura is not an albino but the rare progeny of Little Barrier Island kiwi which have white markings.

The little white kiwi was the thirteenth of 14 kiwi successfully hatched at Pukaha Mount Bruce during the 2011 breeding season.

Manukura - which means ‘of chiefly status’ - was named by local Maori iwi / tribe Rangitane o Wairarapa whose tribal elders saw the rare arrival as a ‘tohu’ or sign of new beginnings.

Conservation message
One of New Zealand’s most published children’s authors, Joy Cowley was inspired to write about Manukura after a visit to Pukaha which is not far from her own home.

The result is a heart-warming story that offers an uplifting and accessible conservation message for young readers.

It tells of how Manukura came into the world and her life at Pukaha, and has a message that like Manukura and all kiwi, all children are special or taonga / treaures.

"I loved writing the book," Joy Cowley said. "I had heard about Manukura and was enlivened by her story."

"I enjoyed making the connection between Manukura's 'specialness' and every child's uniqueness."

Joy Cowley
Cowley, who is a great grandmother and has been writing for the past 60 years, will take Manukura's story to the world's biggest book fair - the Frankfurt Book Fair - later this month.

She is donating her royalties from the sale of the book to assist in restoring kiwi and other wildlife to the Pukaha Mount Bruce forest.

The book, published by Random House, will be available in bookstores from 3 October and at Pukaha Mount Bruce.

Joy Cowley's educational reading material is described as 'learning through laughter'. She has sold millions of reading books for children, and it is estimated 70% of American schools use them. More than 40 million copies of her picture book Mrs Wishy-Washy’s Farm have sold worldwide.

Her many awards include Children's Book of the Year, the Order of the British Empire, New Zealand Post Book Awards and the Prime Minister's Award for Literary Achievement in fiction.

She has published numerous non-school picture books, short 'chapter books' for developing readers and children novels, in addition to seven adult novels, short-story collections and successful film and television adaptations of her work. She published a memoir, Navigation, in 2010.

The Pukaha Mount Bruce Wildlife Centre was the first place in New Zealand to use captive breeding for conservation and is now an internationally recognised facility for a number of threatened New Zealand bird species.

Restoration of the Pukaha forest began in 2001 and trapping has allowed the reintroduction of native species into the unfenced reserve - for the first time in almost 100 years.

Kiwi, kokako and kaka have all bred successfully in the wild at Pukaha.

Visitors can enjoy guided tours of the forest, feed eels, see native birds being fed and tour the kiwi house and interactive gallery. Puhaka Mount Bruce is open every day of the year except Christmas Day.

The sanctuary is in the Wairarapa region, near the town of Masterton. It is a two-hour drive from Wellington, and an hour from Palmerston North.