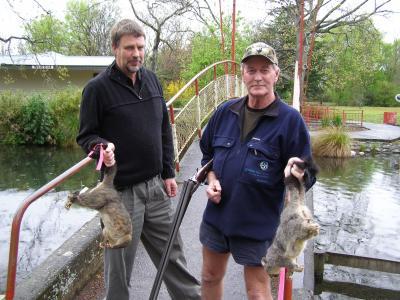 Two nights of spot-lighting in Masterton’s Queen Elizabeth Park by Greater Wellington pest control officer Murry Clark resulted in 35 dead possums. Half of these were shot on the island where the miniature train operates.

Possums were getting stuck into the roses in the park, particularly the heritage roses on the island.

Greater Wellington Biosecurity Manager Davor Bejakovich says there is a possum cull every few years in the park when possum numbers build up and become a problem.

“It may seem odd to have possums in the middle of town. They travel along the banks of Waipoua River and once they arrive at Queen Elizabeth Park they have everything they need to settle down and start a family.”

“Late September is a good time to target possums in the park as they are in the deciduous trees eating the leaf buds. It’s a narrow window before the buds actually burst into leaf and then you can’t see anything.”

“We do this work for Masterton District Council and safety is the main concern,” says Mr Bejakovich.

“Murry uses a shotgun, which has a short effective range, and he is always firing up into a tree. Several people form a cordon to stop anyone inadvertently wandering into the area.”

“And finally we let the police know. They last thing anyone needs is an Armed Offenders Squad call out in the middle of town.”