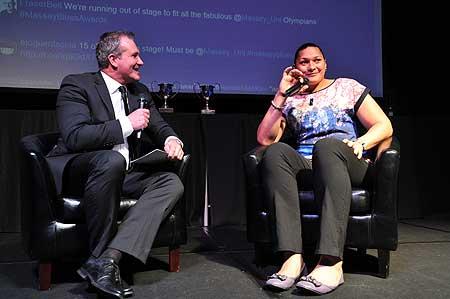 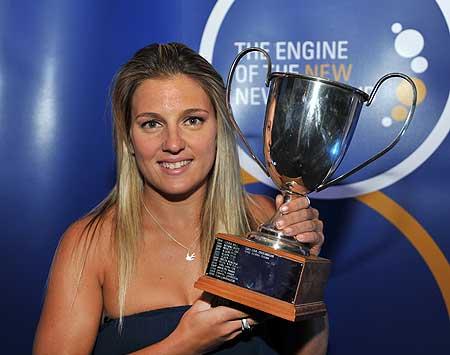 Albany Blues get a golden glow

Master of ceremonies Hamish McKay presented a gift to all the Massey Olympians in attendance, before sitting down to interview Ms Adams on what her life has been like since the Olympics.

New Zealand University Blues have been awarded since 1919, and are presented to high-achieving students in both academic and sporting life. To earn a Massey University Blue, students must pass at
least one third of a full-time study load over a year, and compete at provincial, national or international level in their chosen sport.

Black Sticks striker Gemma Flynn was named 2012 Massey Albany BNZ Sportswoman of the Year, Ms Flynn, who represents Midlands in the National Hockey League and attended her second Olympic Games earlier this year. A second-year Bachelor of Sport and Exercise student, she has been named in the World All Stars Hockey Team in 2009, 2011 and 2012. Ms Flynn interrupted her overseas travel to return to New Zealand to collect her Blues award.

The 2012 Massey Albany BNZ Sportsman of the Year award was given to Paralympian swimmer Daniel Holt, who broke the New Zealand and Oceanic records in the 400 metre freestyle S13 to finish fourth at this year’s Paralympics. Mr Holt is a second-year Bachelor of Business Studies student and represents the North Shore Swimming Club. His international swimming career began in 2007 and he has collected several gold medals and Paralympic swimming records since then. Mr Holt is currently competing in the National Championships, so his proud mother Maree accepted the award on his behalf.

Vice-Chancellor Steve Maharey congratulated all the recipients, saying it was wonderful to see young people not only doing so well in their sport, but also achieving academically, and doing both the university and the country proud.

Senior Partner at BNZ, Richard Blamey, said the BNZ is delighted to support the Blues Awards again in 2012.

“BNZ has been a proud sponsor of the Massey Blues awards since 1995. The high standards set and the recognition of individual achievement is something we enjoy supporting, and the event itself is always a wonderful celebration of students sporting, cultural and academic success,” he said.

The Manawatu Blues Awards will be held in Palmerston North on October 9, with awards being presented to athletes based at Manawatu, Wellington and those studying by distance learning. The dinner will also be attended by Valerie Adams and the Massey Olympians.