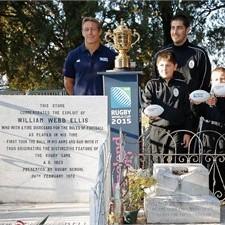 Wilkinson: Rugby World Cup meant a lot to me

As the man who kicked England to victory over Australia in the final of Rugby World Cup 2003, Jonny Wilkinson will always have a special place reserved in the history of the tournament. His extra-time drop goal remains one of rugby’s iconic images, not to mention a classic chapter in one of sport’s most enduring rivalries.

Having played at four Rugby World Cups – the first in 1999, just a year after being blooded on England’s infamous ‘tour of hell’ – Wilkinson understands the competition’s special place in the calendar, and what it takes to go all the way.

After a long career in England with Newcastle, Wilkinson upped sticks for the south of France and a contract with Toulon in 2009. A fluent French speaker and darling of the club’s passionate fans, the switch reinvigorated his game and led to another chance at the Rugby World Cup in New Zealand last year.

Soaking up the morning sun in Menton, prior to laying flowers at the grave of William Webb Ellis as part of the Rugby World Cup road trip across Europe, Wilkinson credits his experiences in 1999 with helping to develop the all-round game that would drive England to victory four years later and set up a long and fruitful career.

“That first moment when you walk into the stadium or you walk into a meeting with the press, you realise that you’ve got it all wrong. It’s a different step and another level that you weren’t even sure existed. In that World Cup, every game we played had talk in the media every single day. The build-up to the games and the energy around the games was just something I hadn’t experienced.

“You think you’ve been to a full house at Twickenham and suddenly you go to Twickenham on a World Cup day. The sheer do-or-die nature of the games just meant that it was shrouded in an intensity that I’d never experienced before. Afterwards, looking back, I’m just grateful I got the shot. It meant so much to me and so much for my career afterwards as well.”

In 2003, England were favourites for the tournament after a stunning run of victories over Australia, New Zealand and South Africa. Wilkinson believes that streak, along with some meticulous preparation, laid the basis for success despite the huge weight of expectation that followed the side.

“That year, 2002-03, was massively important building up to that World Cup. We knew that perhaps we were going to be in that position, where people expected us to do well. You want so much preparation time because you know that when push comes to shove, any team can beat any team. You just want to have as much control as you can.

“Having a pretty much unbeaten season gave us strength and confidence. What we needed to do therefore was continue on that path instead of looking down. We had to go out there and take risks because as people have found out, us included, your past form counts for nothing. It’s all about the next game and the World Cup is a knockout competition. That is what’s great about it but it means that every Sunday or Monday morning you wake up, you get your boots back on and you realise that you’ve got it all to do and all to earn again.”

The final was a classic. Lote Tuqiri and Jason Robinson traded tries, while Wilkinson and Australian centre Elton Flatley slugged it out from the kicking tee as the Wallabies fought tooth and nail to retain the trophy won by John Eales’s men in 1999. In extra time, there was nowhere to hide.

“The final in 2003 was just an amazing event,” Wilkinson said. “Everything just came together. It was always going to go down to the wire. It was incredible to watch something unfold in that way. In hindsight it’s easier to have confidence and say that it’s great that it worked out like that, but at the time, when Flatley put two over to keep tying the game, you’re thinking ‘it’s going to go to a drop goal competition here to win the World Cup’. In the end it wasn’t far off that. Looking back now, we were part of something that was a bit inspired. I’m not sure if we’ll see that too many times again.”

Wilkinson has taken to life in France in fine style, but he is genuinely excited about the prospect of the Rugby World Cup returning to England in 2015. Having been an ambassador for rugby in the north for most of his playing career, he also hopes to see the tournament come to life right across the country.

“The World Cup coming to England is phenomenal. It’s such a great thing to look forward to. Having seen what’s happened with the Olympics there and what we’ve done, there’s such a great buzz and excitement about it already. It will be a great opportunity for England to show what professionalism has done for rugby since 1999 when there were a lot of games in England.

“We’ve made a leap since then – although what a great tournament that was – now we’ve got an opportunity to showcase these fabulous games, these big teams in and around the country, in areas that don’t always see much rugby.”