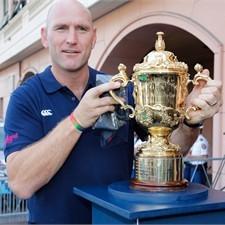 Dallaglio: The gap is closing all the time

Rugby World Cup 2015 will be an event that reaches beyond the borders of England, and its influence will be felt in Hungary this weekend when they face Bulgaria in the opening match of the European qualifying process.

England Rugby 2015 Ambassador Lawrence Dallaglio, a Rugby World Cup-winner with England in 2003, will be pitchside in Kecskemét, as he was when Mexico entertained Jamaica in the first match of the RWC 2015 qualifying process on 24 March.

Having thrived at the sharp end of the domestic and international game – winning Six Nations titles, Heineken Cups and Premierships to complement his Rugby World Cup 2003 and Rugby World Cup Sevens 1993 winners’ medals – Dallaglio will be familiar with the pressure on the players as they seek to create a little slice of history.

In Mexico City he found a bustling rugby scene, and a record crowd was on hand at the La Ibero Santa Fe to see the hosts power home 68-14.

“It was a great experience,” Dallaglio said. “Mexico City is such a vast place, 21 million people, and interestingly a very passionate rugby following. It’s only played by a small group of that population, but they’re very passionate about it. It was a pretty competitive game but Mexico ended up running away with it by the end. It was great to see rugby at a very different level.

“Bulgaria face Hungary this weekend and it will be their chance to put themselves on the world stage and actually, what people have to recognise is that playing in the qualification matches gives those countries World Cup experience. This is their World Cup, this is their tournament.”

Joined by his former England teammate Dan Luger at the Monaco stop of the Rugby World Cup road trip across Europe, Dallaglio spoke of his belief that the gap between rugby’s major nations and developing sides is reducing year on year thanks to greater investment and technical support.

“We’ve seen in the last few World Cups that the gap, while still big, is closing all the time. I think there is an aspiration from certain countries to get bigger and bigger. We’re seeing rugby get much more global. Sevens moving into the Olympics in a few years’ time will only add to that.

“The Rugby World Cup is taking place in England in 2015 – Europe – so it’s going to make qualification very exciting. Eight places are available and there are 80 countries competing. Some of them recognise that they are unlikely to make it all the way to the World Cup but we’ve seen it before, with the likes of Portugal making it through.”

Luger made his international bow against the Netherlands in a qualifier for Rugby World Cup 1999 and proved to be a prolific try-scorer at the highest level. His 24 Test tries included some of the most important in England’s recent history, including a famous winner against John Eales’s all-conquering Wallabies at Twickenham in 2000.

After time spent with Perpignan and Toulon in France, following spells with Harlequins and Saracens, Luger has settled in Monaco, but looking back across the water he believes that there will be something special on offer when the Rugby World Cup comes to England in 2015.

“I think England will take the tournament to another level,” he said. “The support will be like they’ve never seen before. We should look within and England has a lot to offer. I think it will be an amazing tournament. They’re going to do it right, promote it right and everyone in the country will be behind it. It will be fantastic.”