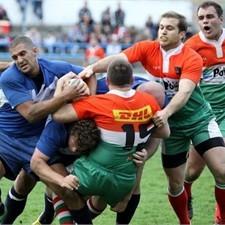 Hungary ready for their day in the spotlight

Three years out from Rugby World Cup 2015, the players of Hungary and Bulgaria will this weekend get a close-up look at what it’s all about.

Saturday's meeting between the two sides will mark the start of the European qualifying process for England 2015 – and there will be some notable guests at Kecskemét, in the centre of Hungary.

The Webb Ellis Cup will be paraded at the European Nations Cup Division 2C match and with England legend and ER 2015 Ambassador Lawrence Dallaglio attending, there is little doubt about the significance of the event for a developing rugby nation.

Hungary Rugby Union President Pal Turi says: “We’re very pleased that FIRA and the IRB have decided to organise this event here – we’re all very excited and, without any exaggeration, this will be the biggest day of our rugby history.”

The likes of Hungary and Bulgaria may be some way off qualifying for RWC 2015 – “this will be the closest chance for Hungary to be near the Webb Ellis Cup in the next couple of decades” says Turi – but the absence, for now, of the more powerful European sides gives them a chance to hog the limelight.

The form guide makes Bulgaria favourites but each side will be confident. Though Hungary has won four of the five matches played between the two countries, Bulgaria triumphed in the most recent fixture, a tightly-fought 29-26 encounter back in June. Bulgaria are also six places higher in the IRB World Rankings at 79.

Hungary and Bulgaria compete in the European Nations Cup Division 2C against Slovenia, Austria and Cyprus, with the team topping the standings earning a meeting with the Division 2D winner next May in the first of a series of play-offs in the region.

Rugby in Hungary is a fledgling sport, with only 2,000 licensed players, but there is no shortage of endeavour from the likes of Turi.

The country may lack the resources for full-time coaching staff, but they have enlisted former Lyon coach Raphael Saint-Andre – brother of France coach Philippe – as an adviser in their preparations for Saturday’s match.

“We can’t afford to hire him full-time so we’re thinking about some sort of plan so he can come over a week per month to prepare the team,” says Turi.

Bulgaria, too, will be calling on some overseas expertise; Bulgarian team manager Robert Antonin, a Frenchman, managed Romania at Rugby World Cup 2011.

Traditionally, says Turi, the Hungarians’ strength lay in the scrum but the emphasis has shifted to smaller but faster front-rowers, and several of the backline are from the Battai Bulldogs side.

Turi says the promise shown by the youth teams is being realised in the senior ranks with several of the players coming through to the senior XV.

The Hungarians also reflect the increasingly global nature of the Game, with two players, prop Daniel Toth and centre Tamas Odor, playing in the UK. Meanwhile, South African number 8 Andre Brand and Welsh fly half Gareth Lloyd are both eligible to play for Hungary having spent several years in the country.

Regardless of how long Hungary’s World Cup dream lasts, Pal Turi and his fellow rugby pioneers can rightly say in the months and years to come that Saturday was the day the rugby world was watching.