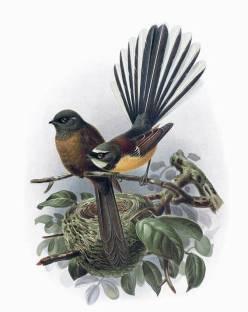 A watercolour painting of the Piwakawaka CREDIT: JG Keulemans

Buller's Birds Brought Back to Life

A complete, all-new edition of the classic 19th century ornithological paintings of John Gerrard Keulemans launched at Te Papa last night.
Hand-coloured prints by Keulemans were first published in 1873 in the first edition of Walter Buller’s iconic book, known colloquially as ‘Buller’s Birds’. Aside from a limited edition released in 1986, this new book is the first time that the full set of these prints of native New Zealand birds has been printed in colour since the nineteenth century.
Buller completed the second edition in 1888, containing new plates, this time using chromolithography, an early form of colour printing. Author Geoff Norman came across the original watercolour proofs for this edition and the subsequent supplement by chance while in the UK.
“I was staying near Tring where the Ornithological Branch of the Natural History Museum is based, and was told about their New Zealand cabinets and also that the original watercolours for ‘Buller’s Birds’ were kept there. I realised how special those paintings were, and when I saw them knew that I wanted to republish them together with the hand-coloured first edition plates,” says Geoff.
“Keulemans’ paintings of our birdlife are bright and luminous and clear. They’re masterpieces. We’re presenting them in this new book at the same size and in the same order as they appear in the original books, but modern scanning and printing means that we are able to reproduce the colour and detail in the way they artist originally intended. I think Keulemans would like what we’ve done with his work.”
Buller's Birds of New Zealand: The Complete Work of JG Keulemans includes the complete set of 95 artworks from both editions of ‘A History of the Birds of New Zealand’ by Walter Buller and the subsequent supplement. Each bird painting is accompanied by extracts from Buller’s original, descriptive text. The book also includes up-to-date taxonomic information in English and te reo Māori, as well as background information about Keulemans and the production of these books.
Buller's Birds of New Zealand: The Complete Work of JG Keulemans, is available to purchase from bookshops nationwide or online at www.tepapastore.co.nz
Keulemans’ images are also being re-published in a lavish range of stationery to accompany the new book and an exhibition that draws heavily on the content of the book can be viewed in The Illott Room of Te Papa on Level 4. The exhibition is open until February 2013 and entry is free.