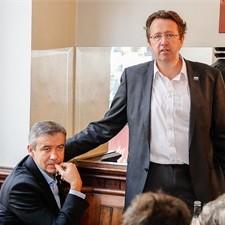 Old rivals pull together for RWC 2015

Each Rugby World Cup offers the host nation a chance to do something different, to bring something unique to the table. England 2015 will be no different, but organisers are also keen to ensure that the elements that made past tournaments so successful are retained and given a new twist.

Rugby World Cup 2015 will be a competition not only for England, but also for Europe. Of the estimated 400,000 fans that will travel to the tournament, the majority will be from the continent. The European qualifying process got underway with Hungary’s victory over Bulgaria last weekend in front a special guest, the Webb Ellis Cup.

It has been five years since South Africa drew a line under Rugby World Cup 2007 in France – the biggest to date and the last time Europe held rugby’s showpiece event. That tournament was characterised by packed houses across the board and a carnival atmosphere among fans.

Etienne Thobois, Chief Executive Officer of the Comité d’Organisation Coupe du Monde de Rugby 2007, is sure that there are examples that are being followed in order to ensure that Rugby World Cup 2015 is a similar success both on and off the field.

“The main point for us was to get the things right for the players and for the teams,” he said. “They are the centre of the show. We had to do that right, and allow them to play the games in the best possible conditions. It’s the obvious thing, but you should start with that.

“The two other things, for us, were full stadiums and also to get some kind of spirit going. The thing we used for that was mainly to work around the volunteer programme, which we started very early.

“We tried to engage early on and when you have 700 guys in a city being engaged and doing social activities, then you start to get some momentum going. In a nutshell, you want to have the players, the crowds and the volunteers mixing and interacting and you’ve got the media that can witness that – that’s more or less the plan.”

Ross Young, Chief Operating Officer of England Rugby 2015, is heading into his fourth tournament and has a wealth of experience to call on. He hopes to repeat the successful interaction with home fans seen in Australia in 2003 and France in 2007, while also incorporating the popular fanzones seen at last year’s Rugby World Cup in New Zealand.

Following the release of the list of potential match venues for the tournament, Young also wants to see rugby embraced across the country. Matches will be held at famed rugby grounds such as Twickenham and the Millennium Stadium, but also at iconic football grounds spread the length and breadth of England.

“If you remember the spectator experience in France, it then kicked on again in Europe,” he said. “France was undoubtedly the biggest World Cup, but the level of engagement in New Zealand, the interaction, the fanzones, took it on to another level.

“We’ve all seen what’s happened in London over the last few months with the Olympics. What we want to do is take what happened in London and give to different parts of the country that same experience. It’s England 2015 and we need to make sure that that remains the case. You’ve got to do the basics well.”