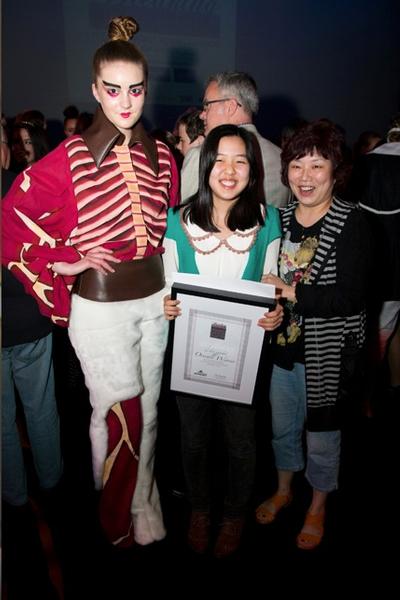 The Newmarket Business Association was thrilled to announce Yeonjae Choi as the 2012 Newmarket Young Fashion Designer of the Year Award Winner.  The award night was held on Friday evening at Auckland Grammar’s Centennial Theatre.

Yeonjae now moves into the exclusive group of young up and coming talent that has been recognized in the prestigious competition and will be receiving a two year scholarship with the highly regarded Whitecliffe College of Arts and Design, as well as a two week internship with top New Zealand designer Vicki Taylor at the taylor design workroom.

Thanks also to Newmarket’s Business World Travel, Yeonjae will be off to Melbourne next year to play an integral part of the 2013 L’Oréal Melbourne Fashion Festival backstage team for the week - helping to produce the many shows and working closely with some of Australasia’s top designers.

Newmarket’s Business World Travel will provide her flights and one week’s accommodation in central Melbourne, so that she can stay close to the action for the whole week. Yeonjae will also receive $1,000 spending money to spend whilst in Melbourne!

Graeme Lewsey, Chief Executive Officer of L’Oréal Melbourne Fashion Festival said  “We’re thrilled to be able to provide Yeonjae with a unique and inspiring journey through Australia’s preeminent Fashion Festival, and a glimpse of what it takes to make it at the top of fashion in Australasia.”

The brief for competitors in the 2012 Newmarket Young Fashion Designer of the Year Awards was to design an innovative and contemporary daywear outfit for today’s young urban man or woman - using global events, popular culture, music, art and technology for their inspiration.

The 18 finalist garments were judged by a leading panel of local Newmarket designers and experts in the fashion industry and announced Yeonjae Choi’s animal cruelty inspired garment as the standout winner with its incredible detailing and creativity in design.

Holly Dodson was announced as 1st runner up, Antonina Fourman 2nd runner up, Cherry Kim as 3rd runner up and Bianca Jones as the 4th runner up.  Mania Moko took out the title of People Choice’s Award with her design, which was voted on by the public through Facebook.

Event organiser Donna Corbel from the Newmarket Business Association said, “We were blown away by the young talent yet again that is out there just waiting to be discovered.”

“As the Fashion Capital of New Zealand, Newmarket is extremely proud to be able to foster and recognize that young talent – who will hopefully have their own flagship stores right here one day in Newmarket!” she said.