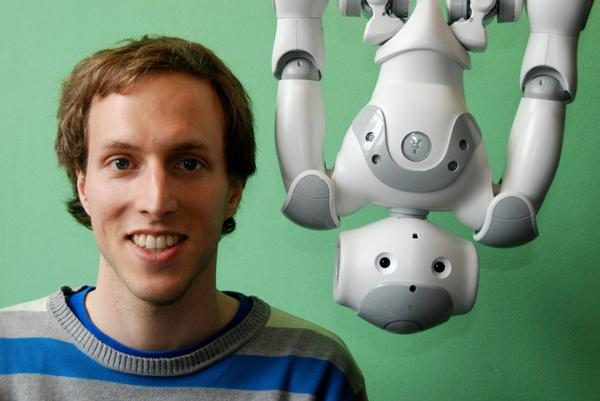 University of Canterbury (UC) research has found people perceive robots, not as objects, but as humans.

UC researchers Christoph Bartneck and Jakub Zlotowski said there was societal relevance on how people will deal with robots in the near future.

``Our experiment showed that we do perceive robots not as objects, but more like humans and this is based on functions of the brain that are very deep down. This probably will have the consequence that we will treat robots, to some degree, like humans,’’ Dr Bartneck said today.

He and PhD student Zlotowski conducted a study on the inversion effect with images of robots in UC’s Human Interface Technology laboratory.

Zlotowski said certain types of images were harder to recognise when tipped upside down compared to when they are shown upright. Previous studies showed that this phenomenon affects images of people’s faces and body postures, but not objects.

``What we investigated in our study, is whether images of robots can be recognised as humans or objects.  We expected that that the more human looking robots would exhibit stronger inversion effect than machine-like robots.

``Interestingly, we found that despite using images of various robots they were perceived cognitively more like humans than objects.’’

Zlotowski said development of technology in recent years allowed production of robots that were not operating in factories or laboratories, but in natural human environments.

The first commercially available service robots were designed to do tasks such as mowing, mopping or vacuuming. However, the range of tasks that they are capable of achieving increases rapidly and robots can be found in theatres (actors), shopping malls (shopping assistants) or museums (tour guides).

There were also robots which take pets’ role and build an emotional relationship with their users or which are used in patient therapy, he said.

It is highly likely that further development of technology will spur their introduction in even more contexts. They will be assigned more roles and become a natural part of human working and living space as was the case with other technology like computers and mobile phones.

``However, it will still take several decades before robots will be capable of behaving as depicted in sci-fi movies and books, such as Blade Runner or Wall-E.’’