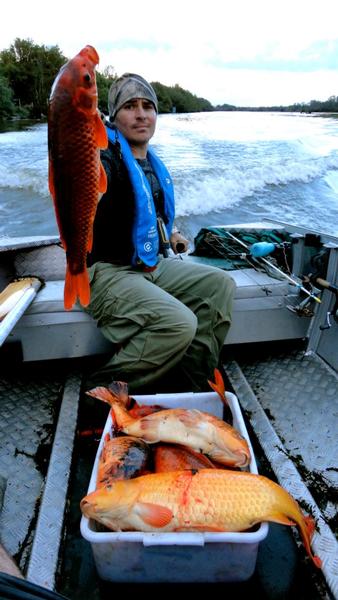 Fishing for Gold (without a rod).

Tonight a number of eager men, women and children are getting rest in anticipation for the annual New Zealand Bowhunters World Koi Carp Classic Bowfishing Tournament. Always a good weekend with a great turnout.

Last year 1555 koi carp weighed in with a combined weight of over 3.5 tonnes.

It has been estimated that Koi were introduced to the Waikato in late 1970's by possible flooding of private ponds.

"A single female Koi can produce between 1 and 2 million eggs and as a prolific breeder the Koi has been classified in New Zealand as a noxious fish. Koi carp dig for food in the mud and can damage waterways by undermining the banks which causes the banks to erode and then collapse." - NZBS.

The fish are weighed throughout the tournament and thrown through a mulcher on the back of a tractor to make berley for the local fishermen, with donations given to Rotary. The mincing ensures the fish are disposed of correctly and avoids further reproduction of the species. One Koi has the ability to populate an entire lake, the correct disposal is of crucial importance to help protect the waterways and other species.

The annual cull is a great way of families to get out together and try a different take on fishing, an affordable way to get into Archery also. Although Koi is a popular bowfishing game in the Waikato, it isn't the limit and saltwater fish, rays, sharks and more are an exciting challenge and some have suggested better eating option.

Good Luck to all the bowyers this weekend!