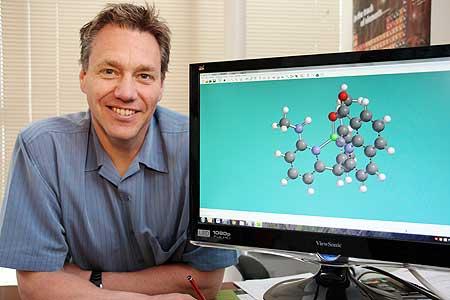 A Massey University researcher has been awarded funding to research how to better deal with beryllium, the most toxic non-radioactive element on the planet.

Dr Paul Plieger, of the Institute of Fundamental Sciences, has been awarded $930,000 from the Marsden Fund for the three-year project. The team he leads includes scientists from the University of Waikato and the University of Auckland.

While beryllium’s toxicity is well known, it has not stopped its use in a range of commercial applications, from mobile phones components and aircraft brake linings to golf clubs and telescopes. But Dr Plieger says the work to understand the fundamental chemistry of the element is yet to be carried out.

“Our main aim will be to develop chelating agents by creating designer molecules that will bind to the beryllium atoms,” he says. “If we can do this, we will be better able to detect beryllium in the environment, develop therapies for individuals exposed to it, and devise protocols to remediate beryllium contamination.”

Dr Plieger says beryllium’s unique properties mean it cannot be replaced by a safer metal in many of its applications. “Anything that requires a high-temperature semi-conductor probably has beryllium in it,” he says.

“The amount of beryllium in electronic componentry, such as laptops and mobile phones, is very small but the problem arises when they come to the end of their lives. If you incinerate them, for instance, you’ll have beryllium dust in the air and it’s the dust that causes the problems.”

He says the molecules they develop will hopefully be able to be used in a number of applications. “For instance we could develop a foam that could be applied after an aircraft crash to stop the release of beryllium dust.”

However, a lot of fundamental chemistry was required to begin. “So little work has been done with beryllium,” he says. “We have some idea about the things that it likes to bind to, but are no organic molecules that can bind to beryllium selectively. This work has been done for pretty much every other metallic element on the periodic table, so we want to do that for this one, too.”