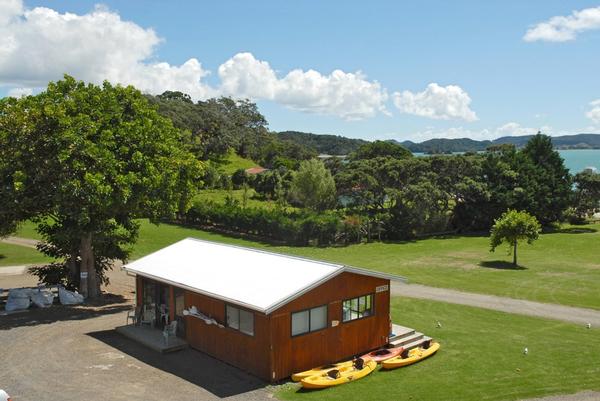 The future of a pristine seaside Northland campground is uncertain – with property developers eyeing up potential conversion of the beachfront site into a holiday home development.

The Whangaruru Motor Camp at Oakura just north of Whangarei, along with the 59.7 hectares of coastal land it is located on, has been placed on the market for sale through a mortgagee tender process. In addition, a 62.6 hectare property located near the campground has also been put up for mortgagee sale.

Both properties are being offered for sale by Bayleys Whangarei, with tenders closing on December 6.

The campground – which overlooks the golden sands of Parutahi Beach – currently caters for all levels of holidaying campers. At peak-use periods such as Christmas and New Year, the campground accommodates holidaymakers in four motel units, five cabins, 42 powered caravan and tents sites  and 40 non-powered tent sites. It also has an administration building and on-site manager’s accommodation

The waterfront block of land is zoned Countryside and Coastal Countryside Environments in the Whangarei District Plan. The Whangarei Coastal Management Strategy Structure Plan has identified that some 2.5 hectares of the campground could be appropriate for large-sized residential sections.

The council has indicated that if a subdivision was built without connection to sewerage lines, it could contain between 10 to 15 properties of 2,000 square metres in size. However, if the subdivision was built with connection to sewerage lines, the number of potential housing sites could swell to 20 plots of 1,000 square metres each.

Bayleys Whangarei salesperson Ross Blomfield said the campground could continue operating as a business in its current format, but he suspected it would most likely be converted into a holiday home enclave.

“The value of coastal land in New Zealand has escalated considerably since 2000, and while there has been some realignment of values following the global financial crisis, its intrinsic worth still remains high,” Mr Blomfield said.

A 2009 Whangarei District Council valuation of the 59.7 hectare waterfront Oakura campground site rates it at $8.31million, while the neighbouring 62.6 hectares hill country landholding, which has panoramic views east to the Poor Knights Islands and north to Cape Brett, has a valuation of $1.047million. The two properties can be bought through the tender process either individually, or as one combined unit.

“From a commercial perspective, the campground generates most of the revenue for the landholding, while some of the hill country overlooking the lower reaches is leased to a local farmer for cattle grazing,” Mr Blomfield said.

A Government report compiled by the Department of Conservation identified that increasing land values in coastal areas has resulted in a number of commercial holiday parks and camping grounds being sold over the past decade, and the sites developed for other uses

The document – Review of Camping Opportunities in New Zealand – said that since 1996, there had been a six per cent reduction in the number of camping areas available – particularly affecting prime waterfront locations such as Whangaruru Motor Camp.