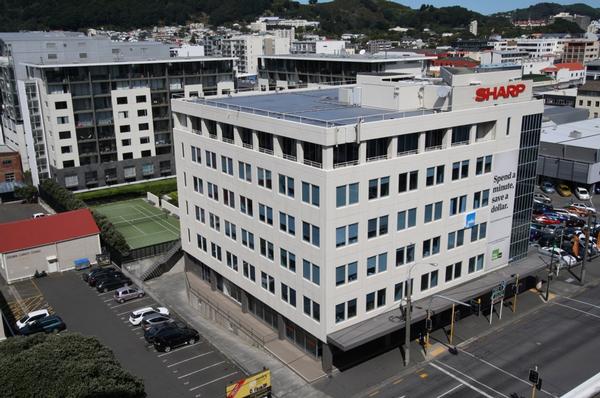 Calculated to generate positive revenues - the imposing Sharp House office block in Taranaki Street is on the market for sale. CREDIT: Bayleys

The imposing building housing the Wellington showroom and headquarters for global office technology and home appliance company Sharp has been placed on the market for sale.

Some 90 percent of the building is leased, while just 397 square metres on level one are vacant. Anchor tenants across the floors are:

The building is being marketed by Bayleys Wellington salespeople Mark Sherlock and Grant Young through a tender process closing on November 21.

Mark Sherlock said the building was currently generating a net income of $869,682 but had the potential, when the vacant space was leased, to generate $986,192.

“A qualitative seismic review of the building by Holmes Consulting Group indicates a rating of between 75 – 85 percent of National Building Standards.

“The property has an extended frontage over Taranaki Street which provides considerable brand exposure for Sharp to the high volumes of traffic using both Taranaki Street and heading east on Ghuznee Street. The Ghuznee Street profile supports a large billboard on the western face of the block.”

The ground floor level tenanted by Sharp features a mix of retail showroom, offices and workrooms. The high stud showroom has an attractive new fitout to support the promotion and sale of business products.
Grant Young said the building’s upper levels were serviced by two 13-person passenger lifts, while a goods lift at the rear of the building rises to level two. All three lifts operate from the basement car park. Office workspace throughout is fully air conditioned, with all levels having access to natural light and their own toilet facilities.

“The immediate surrounding neighbourhood comprise a mix of multi-storey buildings in a mixed-use commercial and residential format. The location is on a main bus route and is short walk from Courtenay Place,” he said.