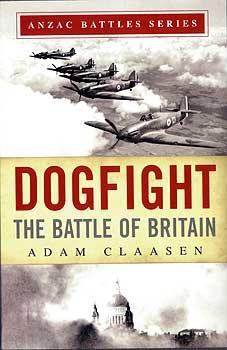 Flying dreamers to fighting pilots in Battle of Britain

Kiwi airmen in the Battle of Britain – one of World War II’s defining conflicts – made a remarkable contribution relative to the size of their contingent, says a Massey University historian.

Dr Adam Claasen, a specialist on the Battle of Britain, has launched a new book on the experiences of ANZACs in the air as well as their friendships, loves, losses and fears off-base during the four-and-a-half month siege in 1940. The term ‘dogfight’ is used to describe close range aerial combat which first appeared in World War I after the invention of the airplane.

Dogfight: the Battle of Britain (Exisle Publishing), offers fresh angles on ANZAC history by examining the cultural, social factors behind the particular prowess of ANZAC pilots in terrifying aerial dogfights, and their raffish, glamorous image on the ground. It is the latest in the ANZAC Battles Series edited by well-known historian Professor Glyn Harper, from Massey University.

ANZACs made up the second-largest foreign contingent in the Royal Air Force’s (RAF) Fighter Command. He interviewed three of the four surviving ANZACs who were among the 134 New Zealanders and 37 Australians who fought as part of the RAF’s 3000-strong command in the Battle of Britain.

Dubbed ‘The Few’ by Sir Winston Churchill for their bravery in deathly aerial battles against the Nazi enemy, Battle of Britain fighter pilots are widely credited with determining the course of the war, paving the way for D-Day and an eventual Allied victory, he says.

“I wanted to tell the story of the ANZAC pilots, from when they first dreamed of flying as young kids, and how that dream was fulfilled in an unlikely way in Britain against the Germans, which they would never have conceived of as youngsters,” he says.

In wartime, class distinctions evaporated among the ranks of fighter pilots. Unlike their British counterparts, Kiwi pilots were not public school educated. “Kiwis were egalitarian, and it was not uncommon for them to become friendly with their engineers and armourers. They earned respect because they were good at rugby and brilliant pilots.”

The day-to-day pressures of fighting – enduring three or four sorties a day where they faced the possibility of horrifying death or the loss of comrades – took its toll. “They suffered increasing fatigue, running on fumes and the intensity of combat. They became more snappy, they lost weight, and often drank heavily.”

Fighter pilots also acquired a “celebrity aura” after Churchill’s famous words. Kiwis were among this revered bunch also known as the “Brylcreem boys” in reference to their slick hair and being seen off duty wearing flying jackets, trousers tucked into boots, often with a pistol, and a woman on each arm.

Twenty New Zealanders were killed in the Battle of Britain – the youngest, 18 years – and other Kiwi airmen died in subsequent war action.

Claasen writes of other notable Kiwis who dealt with the grim consequences of the Battle of Britain. Famous World War II plastic surgeon Sir Archibald McIndoe, who worked for the RAF, was one of three New Zealand plastic surgeons in the war. “He developed techniques to deal with the massive burns fighter pilots suffered and he revolutionised treatment. If a plane, like a Hurricane, caught fire and fuel entered the cockpit, the pilot could end up with horrific burns if he survived at all.”

Despite several books on the man, Claasen says McIndoe remains an unsung World War II hero in New Zealand. Another is Sir Keith Park, who he describes as “undoubtedly New Zealand’s greatest wartime commander and an ANZAC whose influence on twentieth century history is challenged by few contemporaries.”

An ace squadron leader in World War I, Sir Keith was an outstanding military strategist whose tactics were pivotal in World War II aerial warfare.

Claasen quotes Lord Tedder, Marshal of the RAF: “If any man won the Battle of Britain, he [Sir Keith Park] did. I do not believe it is realised how much that one man, with his leadership, his calm judgement and his skill, did to save, not only this country, but the world.”

His achievements make him a contender to be on the NZ$20 note when it comes up for re-issue, says Claasen, and he intends to make a case. “Given the popularity of ANZAC Day, why would we not be honouring someone, and what New Zealand commander has had as big a role in history as Sir Keith Park? There aren’t any.”