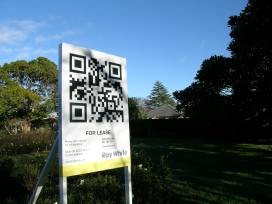 Where the codes appear in �real life� and where in cyber-space they transport users is pretty much limitless. New Zealanders are most likely to see QR Codes first popping up in front yards on Open2View.com Real Estate signs CREDIT: Open2View.com

A new way of connecting the real world to the internet and vice-versa has reached New Zealand in the form of QR Codes – puzzling looking pictures that are appearing on Open2View.com Real Estate billboards across the country.

“At Open2View.com we’re using QR Codes to literally connect people to the information they want at the click of a single button – in this instance the camera on their mobile phone,” says Open2View.com Managing Director Chris Bates.

Although ingenious in their application and somewhat mysterious in their appearance, QR Codes are surprisingly simple. Most new 3G phones[1] with a QR Code Reader (easily downloaded from the internet) can decipher them. Take a photo of a QR Code and the reader software scans the image, launching the phone’s browser and taking it directly to a programmed URL.

Where the codes appear in “real life” and where in cyber-space they transport users is pretty much limitless. New Zealanders are most likely to see QR Codes first popping up in front yards on Open2View.com Real Estate signs.


“Up until now Real Estate signs have really only let people know that a house is for sale – perhaps showing a couple of photos and giving the agent’s contact details, but essentially leaving all the work up to the would-be-buyer who has to note down the details, go home and then get online or on the phone to find out more,” says Mr Bates.

An inevitable result is that many would-be-buyers get lost along the way. With a QR Code however, you can connect with an interested party immediately and often in a much more meaningful way.

“Walk past a house you like the look of and you don’t need to wait until Sunday for the open home, just snap the QR code and get transported to a website with a virtual tour immediately – all at the click of a camera,” he says.

Open2View.com is in the process of posting thousands of QR Codes on properties for sale up and down the country. Ultimately every Open2View.com property will have one and they will appear in all the traditional Real Estate marketing materials – from print advertising and home front signs, to window cards and flyers.

Although a new innovation for Open2View.com, QR Codes reflect the company’s long held belief that consumers increasingly want to control how and when they access information.

“There has been huge growth in mobile and 3G data services signalling our collective desire to be able to tap into information on our own terms. Unlike traditional forms of advertising, QR Codes put the user in control – allowing them to access the information they want, where they want and when they want,” Mr Bates says.

While the technology is new, Open2View.com anticipates its biggest challenge will simply be getting the message out to consumers so they realise how easy it is to use QR Codes.

About QR Codes
A QR or Quick Response Code is a two-dimensional bar code that was originally created by Japanese global automotive components manufacturer Denso-Wave in 1994, to keep track of its inventory.

Essentially QR Codes help us make an easy connection between the physical world (where the code is on display) and the internet. This kind of mobile tagging, as it is known, originated in Japan in 2003 but is really only now reaching the rest of the world – including New Zealand where Open2View.com will be the first company to use QR codes and Mobile Tagging.

A key reason cited for the growing popularity of mobile tagging like QR Codes is that it delivers quick, precise and customer-driven access to information.

While the term QR Code is a registered trademark of creator Denso Wave Incorporated, it is an open format that can be used royalty-free by anyone.

Innovative QR Code applications
The Pet Shop boys peppered their 2007 music video for Integral with QR codes that, when scanned, took viewers through to information critical of the British Government's National Identity scheme which the song was protesting – plus they looked cool in the video!

San Francisco got inventive about tourism in 2008 when they put QR codes on a number of historical landmarks and restaurants so that technologically inclined tourists could give themselves self-guided tours of the city (and then presumably decide where to go for dinner!).

Smart individuals have taken to self-branding with QR Codes. Coffee mugs and t-shirts might be hiding dating profiles or dirty secrets for those in the know.


About Open2View.com
Open2view.com is a Real Estate marketing, website service and digital photography franchise that is revolutionising the way real estate agents operate their business. Established in New Zealand by Chris Bates in 1999, there are now more than [number] franchises throughout New Zealand, Australia and the US.