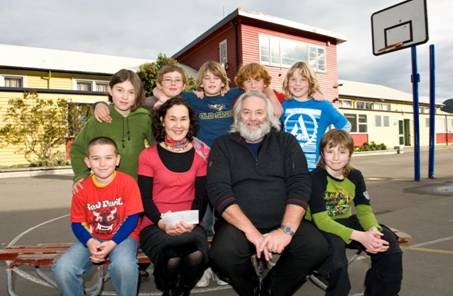 Budding eco-educator Lyttelton Main School was awarded a cheque for $50,000 from Yealands Estate to help re-build the school with sustainability in mind.

At a special school assembly on Friday 19 June, 145 students greeted Peter Yealands, owner and founder of Yealands Estate, who presented the award and cheque to the school.

Dedicated Year three and four teacher Liza Rossie nominated the school for Yealands Estate’s ‘My Green Idea’ contest and was selected from thousands of entries as the supreme winner.

Liza says the school has earmarked key initiatives this prize money will fund as part of a bigger re-build of the school.

“We can upgrade insulation, double glaze the windows and implement water harvesting with this prize money – it’s dream come true.”

Solar panels will complete the school’s ‘My Green Idea’ wish-list and will be a visible reminder of the importance of the environment for this next generation of clean green Kiwi students.

For Yealands Estate owner and founder Peter Yealands, the decision was difficult and meant reviewing thousands of entries from around New Zealand.

“We choose Lyttelton as the winner of ‘My Green Idea’ because they’d already made a start in educating kids about sustainability. And it’s nice to think we can play a part in inspiring the next generation of environmentalists.

“They’d started small with things like litter-free lunch days, recycling and worm farms, so we’re happy to give them a ‘leg up’,” says Peter.

The school appoints environmental leaders from its year 6, 7 and 8 students and hopes to establish a Peter Yealands Environmental Trophy to acknowledge one of those leaders each year.

Lyttelton Main School’s roll has more than doubled in the past four years. It has recently received government funding to for the re-build as blocks date back to the 1930s. It is anticipated the rebuild will take two years to complete.

Yealands Estate is New Zealand’s leading sustainable winery and was recently awarded carboNZero Status. The ‘My Green Idea’ promotion was Peter’s challenge to the nation to increase sustainability initiatives.

Peter said the response to the promotion showed New Zealand is full of people eager to share how they can lessen their impact on the environment – from the grand ideas to the everyday.

“I’d like to thank the thousands who took the time to enter – the ideas, creativity and enthusiasm for sustainability are so encouraging.”

“Thanks to New Zealanders there is now a huge online library of innovative, useful and practical ways we can care for our planet.”

The ‘My Green Idea’ promotion resulted in thousands of entries from around the country. Below are some of the most popular – and simple – ways Kiwis can be green:

· Have children learn to grow vegetables at school
· Switch your washing machine off – it uses as much electricity on stand-by in one day as it does for a single wash
· Full fridges use less electricity than empty ones – fill the fridge to save on your power bill
· Take your own mug to your favourite café to save creating litter – some cafes will even reduce the price
· Create a ‘green’ trade day with your family and friends – sell and swap home grown vegetables, clothing and other household items
· Plant a tree on every birthday to keep New Zealand green
· Create your own home cleaning products by using pantry items such as white vinegar, baking powder and lemon juice
· Buy locally – visit farmers markets with a basket – save on food miles and plastic bags.

Peter Yealands began developing New Zealand’s largest privately-owned vineyard six years ago in the rolling foothills of the Awatere Valley, Marlborough with a 100 per cent commitment to the environment.

His unwavering vision has translated into a winery valued at $45 million alone, featuring advanced green production technology alongside a host of innovative ideas devised by the Yealands team.

Yealands wines launched to great acclaim in August 2008, and have collected 33 awards in the first year, which goes to show that being green also means making a great drop.