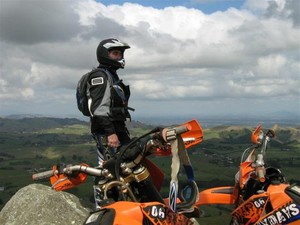 Poke the boring people with a big stick and then run away laughing!

Over The Top is about fun, and finding out a little about yourself and your mates.

Book a tour with us and you will discover how to hold a weta, what mud tastes like and where to find furkles!

Thursday, 1 July 2010
10:19AM
Chris Birch Wins Red Bull Romaniacs! Chris Birch arrives only a few minutes behind of Jarvis - and wins the Red Bull Romaniacs for the first time in his career! The blazingly fast New Zealander didn't go for safety on this last stage - in fact, Birch even rode 6 minutes faster than Graham Jarvis on the last 126 km of this years Romaniacs and secured his first ever win at the world's toughest Enduro Rallye. 758 views

8:48AM
NZs Chris Birch leads 'toughest race in the world'   On day four of this epic race, the rain is not only a constant companion but has become the dominating factor of the Red Bull Romaniacs 2010. 651 views


Thursday, 24 June 2010
5:20PM
Taniwha sighted in Coromandel hills "I was standing in this creek bed and It just swept past me and climbed that slippery clay bank and dissapeared over the top of that hill" 2445 views


Wednesday, 26 August 2009
9:57AM
$20 million Tourism Centre for Waihi New Zealand is to get a $20 million gold discovery centre designed to attract additional tourist spending and provide a mid-way stopover between the visitor hot points of Auckland and Rotorua. 1172 views

9:19AM
Council Upbeat over Hauraki Rail Trail Cycleway The Prime Minister’s recent announcement that the Hauraki Plains Trail is one of the 7 quick starts for the National Cycleway project is excellent news and some of the more positive for the Hauraki District in recent times. 942 views