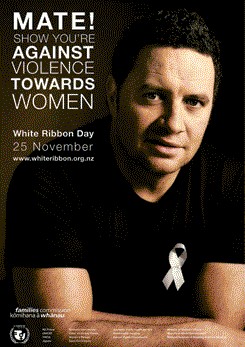 November 25th is International global awareness day of violence towards women – tying or wearing white ribbons everywhere to highlight the violence imbedded within society towards women reveals the extent of this cultures misogyny towards the feminine.

Amnesty International say that Violence against women is a global shame – and UN statistics reveal a horror story of violent abuse and rapes of women around the globe. Every year women’s’ refuge and rape crisis struggle for funding, and every year sees more women seeking their services, another generation of women replacing the previous. Ads on television now promote an anti violence message – its not alright – but year after year – generation after generation that violence – no matter how much money we throw at it, seems to continue. Why?

The answers and remedy for the repeated violence against women is deep seated and historic. We won’t fully stop the violence untill we understand the origins of the beliefs that lie at the foundation of male violence towards women. If we are willing to take a look at some underlying beliefs ingrained in our culture about the nature of women we might find a place start healing.

There are beliefs that have been deeply instilled by religions, beleifs that have their origin in erronours concepts of androcentric ideas about the nature of women - today all the worlds religons still have no feminine face of divinity, no counterpart to the father and son duo. (Few see the relevance of the missing feminine ) The absence of a feminine face of divinity reveals a deep blind spot. see the work of Raine Eisler and Marija Gimbutas

The origins of this cultures continual abuse and violence towards women will never be fully addressed while we continue to maintain a culture that has inbuilt within it the trivialisation and subjugation of the feminine. This is clearly seen in the mainstreaming of the porn industry. The boobs on bikes, may be ‘harmless’ fun but in and of its self at a much deeper level it simply illustrates the degrading nature this culture has of viewing women as nothing more than tits and arse - all targeted to a male audience.   of course many women are uncomfortable about it - but are unable to articulate that uncomfortableness clearly and get ridiculed and called names when they try to do so, not wanting to go against the grain most end up going along with the crowd.

The recent historic rape cases by members of the New Zealand Police force are an interesting representation of a system of beliefs about women ingrained not only in the police, but deeply entrenched in male culture.   Violence against women is a consequence of male violence and we need to address it seeing it as such.

This is not to say that all men are violent, indeed they are not, but we have such a high degree of violence in this country that should tell us that something is terribly out of balance.   We will never get to the source of it while we continue to fragment it into different areas of abuse i.e violence against women, violence against children, street/gang violence and violence against nature.   All these are NOT isolated incidences of violence, they are all connected with one common thread – cultraly induced male violence against the feminine

The misogynist beliefs that led to police/male gang/pack rapes of young teenage girls, willing or not are deeply entrenched beliefs held and cultivated by a boysie, kiwi culture that we never speak about and never examine. Its just boys being boys isn’t it?

As I write this a young woman in the Middle East is being sentenced to 200 lashes – her crime, she was raped. And not long ago in Iraq, several young teenage girls where hanged for being raped!!!  this extreme action is typical of a set of beleifs in the wrongness of being female - orginating in religous texts and encoded into law.

How women are viewed in different cultures is a good example of the beliefs ‘mankind’ holds about the value of women.   From the extreme to the passive, abuse of women can be seen globally as a sign that ‘mankind’ still holds tight to some very deep seated and erroneous beliefs about women and the feminine which result in incredible abuse and violence. These beliefs are a huge blind spot and monstrous justifications are held for maintaining them.

Here are just a few beliefs against the wrongness of being woman– they remain ingrained, unconscious blind spots that underpin the core of this societies violence against women

"To be fully developed as a human being is to be born male" claimed Thomas of Aquninas, who believed the female sex was produced by a defect in nature.

"if the world could be rid of women, we should not be without God in our intercourse" said Cato of Utica

Ancient beleifs you might think - and nothing do to with the 21st century world. Think again.

These are core fundamental beliefs that have been with us since the time of  the Adam and Eve myth which gave rise to the initial lie still deeply ingrained– albeit unconscious - that woman was created for mans pleasure and from his rib or as some writers saw it, from the filth of the earth.

It is my contention that in order to fully comprehend the level of abuse and violence women the world over have been and are still subjected to, its imperative that we take a good long look at some of our core fundamental beliefs because there is still a deeply entrenched belief in the wrongness of being woman embedded within our culture - and it is this that gives rise to the violent abuse and dysfunction that sits between the masculine and the feminine halves of humanity

in light of this I would like to honour  EVE -I would like to take this moment to correct a great misunderstanding that has given rise to so much voilence towards women. It is in the different meanings ascribed to words that one of the biggest frauds ever perpetrated against woman - the feminine - originates - taken from Laurence Gardner's Genesis of the Grail Kings; page 110

"In Genesis, EVE is named MOTHER OF ALL LIVING, in Hebrew, EVE was known as HAWAH (AVA) the verbal root which gave rise to the name HAYAH meaning to live, hence EVE was akin to the Sumerian NIN TI which meant LADY OF LIFE who was infact NIN KHURSAG. The Sumerian word T^I meant TO MAKE LIVE, but another Sumerian word also TI but pronounced TEE meant RIB. so when NIN TI was transposed to the name EVE it was correctly interpreted by the Genesis compliers, but its further association with Adams rib was wholly inaccurate and had nothing whatever to do with the original accounts" S

The misinterpretation of the words Ti - pronouced Tie - meaning LIFE and Ti pronouced (tee) meaning RIB has created a major strategic manipulation that has been responsible for the validation and justification of women's inferior status to men. By association it has given rise to the horrendous legitimization of violence against women as an inferior being. It has also caused her to invalidate herself and go along with the male order of things, simply because she did not have the knowledge of her own herstory to validate her existence.

We might think that since women got the vote, (something she had to fight for, for hundreds of years because men deemed her unfit to exercise her intelligence) that things have changed. We might be under the false impression that because we have a female Prime Minister and other high ranking women in positions of power that things have changed. They have not – abuse statistics are testimony to that

We are however, changing. It was only a couple of decades ago that children born out of wedlock for instance were called bastards and their teenage mothers condemned. Its was only in the 70’s that this country implemented laws to protect women from the voilence of their partners - and its only now that these laws are being taken seriously. So we are changing albeit slowly.

This hostile belief against the feminine is reflected in the abuse and degradation of the earth, who we deem feminine and call mother. We exploit every part of the earth just as we do women and her body, draping her over the car, the boat, the bike.

Its important to recognise the level of male violence against women, but its also crucial to comprehend where the source of this comes from.

Its deeply ingrained within our culture in so many different ways and in this modern world its hard to discern amidst the sexy music video’s and the sexy fashions – the sacred has given way to the profane. But its equally vital that we address the problem of male violence, because when one half of humanity is ranked superior over the other which is ranked inferior a huge imbalance occurs and we all loose out.

It is my contention that although it has been women's culture and spirituality that has been absent from history and denied her as of right, a woman cannot heal nor can she reclaim her rightful power, if she continues to see the mans world and the men in it as her enemy.

Despite the horrors of rape, childh sexual abuse and all the injustices continually inflicted on the feminine, by this I mean women, children and the planet, it is necessary for woman, in her reclaiming, to see that there have been civilizations whose culture was based on the masculine's support of the feminine. As women we need to know this, in fact it is vital that we recognize it, because if we do not, then we cannot heal what must be healed in order to create anew.

It has been through the subjugation of women that men have robbed themselves of being able to fully express the masculine, instead they have conformed to the patriarchal androcentric beleif systems, thereby becoming victims, unable to give to the feminine and unable to fully reveal themselves.

We need to recognize that men have been victims, albeit in a different way than women. As long as the antagonisms that have helped define the battle and violence between the sexes remains, along with the inferior/superior dualisms, we will continue to be influenced by these deeply ingrained beliefs systems and we will change nothing and continue to see more violence and abuse.   Like the medical profession that manages illness uninterested in finding the cause, all we will be doing is throwing balm on a deeply ingrained and entrenched system of beliefs that continue to cultivate male superiority  and father right over all things feminine including children and his own emotional nature -  we will all loose out.

We need our men to be strong and supportive. we need our complimentary other - we need his love

Useful resources with advise for men

Preventing Violence in the Home

Information for men on how to help eliminate family violence

The Chalice and the Blade