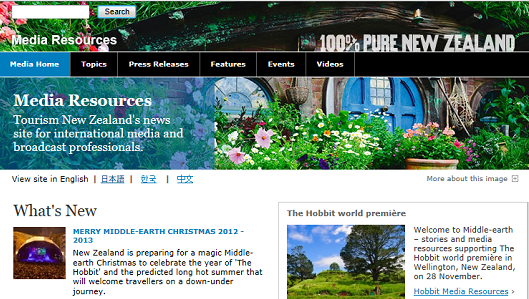 The result coincides with the global premiere of The Hobbit: An Unexpected Journey, a production of New Line Cinema and Metro-Goldwyn-Mayer Pictures (MGM), which was hosted in Wellington and drew significant international attention.

The role of the website is to make it easy for anyone wanting to publish content about New Zealand to do so, by providing news-worthy content, and links to free images and broadcast footage produced by staff familiar with media requirements.

"The international media website provides those things and promotes the many amazing destinations that make up New Zealand. It is used by hundreds of media every year.

"Since its launch, our Maori culture content has consistently been the piece that receives the most page views. In November however, that was surpassed by Middle-earth content."

Significant time and energy was invested in the international media website in advance of the world premiere of The Hobbit: An Unexpected Journey, in New Zealand.

The latest update to the site is a feature on New Zealand locations for The Hobbit: An Unexpected Journey.
Even more material has been developed on New Zealand's screen industry to support media who want to tell a wider business story.

The week of the premiere saw around 100 international media in Wellington who were all provided access to New Zealand broadcast footage, imagery and news stories by Tourism New Zealand.