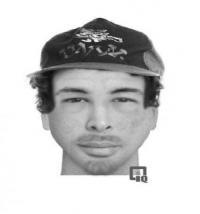 Palmerston North Police have just released an identikit image of a man whom they believe is responsible for sexual violation against a 19 year-old woman.

Police are investigating the incident which took place on Broadway Avenue, Palmerston North, in the early morning of 6 January 2013.

The woman was attacked as she walked along the street by a man not known to her near the intersection of Broadway Avenue and Albert Street.

Police are seeking witnesses who were in the area of Broadway Avenue and Albert Street between 3am and 7am.

Detective Shelley Ross said: "An identikit image of the male offender has been completed and Police are seeking any information surrounding the man's identity.

"We encourage anyone who has any information to contact the Palmerston North Police Station on (06) 351 3600."

Alternatively information can be provided anonymously through Crimestoppers on 0800 555 111.