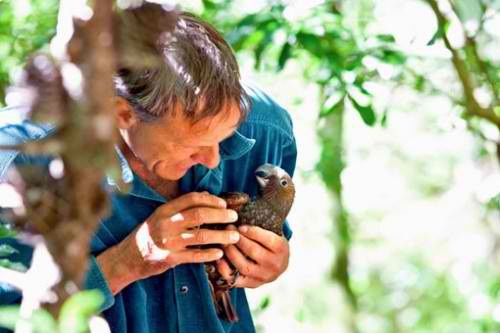 A park ranger holds the kaka chick after it had fallen from the tree. CREDIT: Wellington City Council

The kaka chick found in a nest in Prince of Wales Park last month has been out and about exploring the neighbourhood.

The chick is now about two months old and, if it survives, will be the first kaka known to have bred successfully outside of Zealandia, where birds were released in 2002. Kaka were previously considered to have been extinct in Wellington since early last century.

As it's still learning how to fly, the chick will often end up on the ground where it is at risk from dogs and cats.
The Council's Manager of Community Engagement and Reserves, Myfanwy Emeny, says kaka like to nest in natural cavities in old trees.

"We're working with community groups to replant the area in native trees, which will eventually provide more nesting places for kaka when the forest matures."