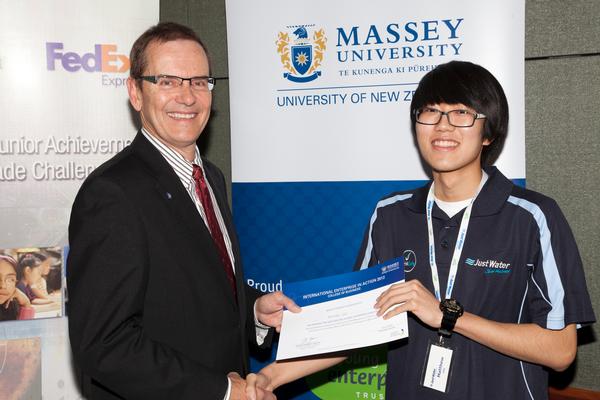 A Korean student who was inspired to join Massey after winning a business competition on campus is the first international student to be accepted into the Captains’ Club programme.

Myeonggyun Lee, known as Matthew, studied at Takapuna Grammar School and is now the recipient of a $5000 scholarship towards his course fees on the Bachelor of Business Studies.

He was part of the winning team in the Global Enterprise Challenge run by the Young Enterprise Trust on the Albany campus last year that came up with an idea for a micro-business startup to create jobs for young people.

Mr Lee’s team of seven came up with a business idea called GlobalSEEDZ, where young people would be given a “garden in a box” to grow produce. After harvesting their vegetables, they would sell them back to GlobalSEEDZ.com for distribution.

He said the experience left a lasting impression on him.

“Our team came first in New Zealand and second in the world. I had such a great experience on the innovation campus and meeting the business Pro Vice-Chancellor Ted Zorn, who left such a good impression on me, that’s why I chose Massey Albany.”

Originally from Seoul, Matthew is one of 30 students across Massey’s three campuses who have been successful in receiving the award.

He has already signed up as a member of the Student Investment Club and Enactus and will be a class representative.

The Captains’ Club scholarships are for students selected for their leadership skills – sporting or cultural achievements at secondary school. Those selected include head boys and girls, senior prefects, team captains and leaders of cultural or elite groups.