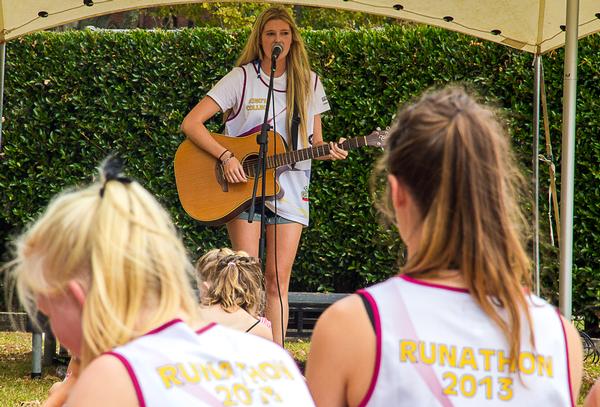 King’s College students have already raised well in excess of $25,000 for charities Kiwi Can and St John at its annual runathon on Saturday 16th March.  An annual event and with an emphasis on having the entire family involved, the runathon has become an integral component of the college’s many fundraising and charity events which are organised by the school’s students.

The runathon was organised by a team of seven students, led by team leader, Ellie Richards and under the guidance of the King’s College Chaplain, Warner Wilder.  Students, their families and teachers, including Headmaster Bradley Fenner ran as many laps as they could around the King’s College athletic track.

“The runathon is an extension of the King’s College community service programme, which was created around the concept of doing something for the community.  There are over 500 students involved in our community service programme and being located in South Auckland, there’s a whole lot of need on our backdoor step which provides a real opportunity to help our community,” said King’s College Chaplain, Warner Wilder.

This year’s Runathon was more successful than ever.  Inviting the student’s entire family – Mothers, Fathers and siblings made it a real family event.  The students designed running singlets, which were sold and raised additional funds, as well as food stalls and entertainment throughout the day.

Jamie McDell, rising Kiwi Popstar and student at King’s College in 2009 and 2010 performed for her fellow school in support for the King’s College community service programme.

“King’s has given me so much.  I started singing in the chapel band which really brought me out of my shell and if there’s anything I can do for King’s, I will always try and help,” said McDell.

The Community Service programme was introduced by way of giving back to the community and King’s students are involved in a plethora of activities including a refugee visiting programme, Kids First Hospital, Outreachers reading programme, Totara Hospice and work in rest homes.

“The Christian ethic is to care for your neighbour and this generation are very much aware of their community and their place in the community.  Generation Y are fantastic – they are far more outward looking,” Chaplain Wilder said.