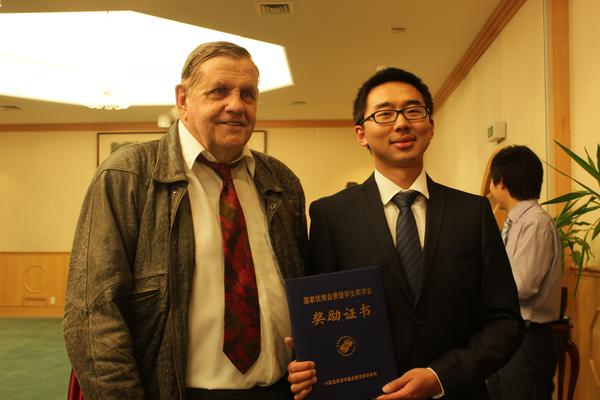 Mr Zhong, from Liaoning province and studying at the Manawatū campus, is one of two New Zealand students to receive the award.

“I chose Massey University because it is one of New Zealand's leading educational institutions, and provides me with a fantastic environment in which to study, he says. "My supervisors, Professor David Penny and Professor Peter Lockhart, both are internationally well-known researchers in the field of molecular evolution, and it is my great honour to work with them.”

Massey International Office director Arthur Chin representing the University at a ceremony at the Chinese Embassy in Wellington. Mr Chin says the University has a long association with China and Chinese students. “Apart from two tripartite agreements with Peking, Shihezi, Ningxia, and Shanghai Jiaotong Universities, we have over 1300 Chinese international students studying across our three campuses.”

Mr Zhong says the award is an important outcome in his PhD studies. While it acknowledges research that he has completed, it also signals a new beginning. From here, he plans to build expertise in his research field, and serve his country in the near future.

In 2003 the Chinese Scholarship Council, approved by the Chinese Ministry of Education, established the Chinese Government Award for Outstanding Self-Financed Students Abroad, with the aim of reflecting the genuine care that the government has for all self-financed students abroad, as well as rewarding the outstanding achievement in their studies and encouraging them to return to China. Since then, 2907 scholarships have been awarded. The amount of the award is US$6,000.00 per person, with US$10,000.00 awarded to Achievers of Excellence.