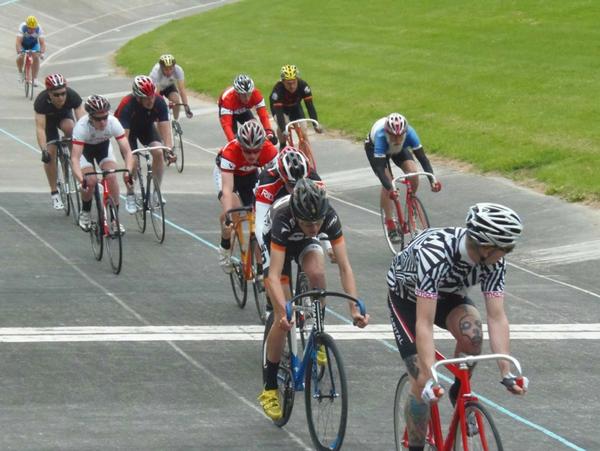 Burkes Cycles Round 1: Blakely off to flying start

A great start at round one of the 2013-14 Burkes Cycles Speed League on November 3 with 34 riders signing up for racing across three grades plus an extra women's category. Under 19 Zac Blakley picked up wins in the grade A Elimination Race, Odds versus Evens and helped his team gain maximum points in the Team Scratch. After finishing third in the Scratch behind 2012-13 overall champion Nick Warren and Jon Barnes, Blakely rode a clever tactical Elimination Race, avoiding taking the lead until the final lap when he showed Warren a clean set of wheels in the final sprint for the line.

For his efforts, Blakely tops the new season league table with 22 points and will get to wear the Champion System leaders jersey. However, his lead is slim and there are a number of riders hot on his tail. Newcomer Max Uivel won his first ever track race in the B Grade Scratch and picked up a second and two third places later on. Jake Jamieson was another B Grade winner, and is lying in joint second place with Uivel in the overall table on 19 points.

While 2012-13 season under 15 winner Martine Barnes won the women's Scratch, it was Hannah Latta who scored enough points to become first leader of the women's competition. Taking a break from her super-enduro training, Latta won the Elimination race ahead of Renita Vanderhelm and Sarah Barclay. With the top six within six points of each other, it looks as though the women's competition will be a battle to keep a close eye on.

In the C Grade, Sam Tillotson won the Scratch ahead of father-son combo Louis and Jamie Hodgkinson. Louis stepped up in the Elimination to win a thrilling sprint against David Bernard. Liam Cooper was the Odds Versus Evens winner.

Round two of the Burkes Cycles Speed League is on November 10 at Wellington Velodrome in Hataitai.