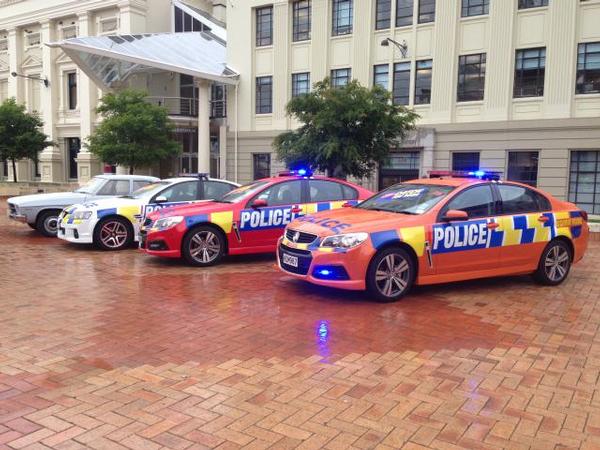 Road safety agencies are putting the brakes on speeding, drunk and dangerous drivers this summer, with new tools to reduce death and trauma on our roads.

As part of a multi-agency summer road safety campaign launched today, two new firsts ­have been announced – a two month reduced speed threshold of 4km/h, and the national trial of 28 highly visible coloured Police patrol vehicles to be rolled out across the country over the next year.

Assistant Commissioner Road Policing, Dave Cliff, says: "While most Kiwis are looking forward to getting away on their summer holidays, far too many will never make it home, and still more will face a lifetime of debilitating injury from avoidable crashes. Summer is a risky season on our roads and it's even more dangerous when people drive too fast, drink too much or take other unnecessary risks.

"That's why a raft of road safety agencies, including Police, ACC, the Ministry of Transport, and the NZ Transport Agency, along with the Energy Efficiency and Conservation Authority, are supporting this campaign to reduce the human, social and economic cost of speeding and other risky behaviour on our roads this summer."

Mr Cliff says from 1 December 2013 to 31 January 2014, Police will be strictly enforcing a reduced speed threshold of 4km/h, and will have "no tolerance" for those flouting the law. This will be accompanied by a continued focus on drink driving, restraints and other unsafe behaviour.

"As we have already seen during the two most recent long weekends this year when there was a total of just one death on our roads, stricter enforcement around speed, along with a range of other safety tactics, can make a real difference in saving lives, preventing injuries, and leaving fewer grieving families behind.

"Our research shows that when police combined high visibility tactics with a reduced speed threshold during Queen's Birthday Weekends in 2010 and 2011, the total number of fatality/injury crashes reduced by 25%, compared with the previous two years. That's an average of 30 people whose lives were saved," Mr Cliff says. "If, as country, we can save that many people over a few days, the question for all of us sharing the roads these holidays is how many could we save over two months?"

Mr Cliff says while every death is a tragedy, the number of people seriously injured in crashes is often forgotten. "Reducing the life long disabilities and trauma suffered by crash casualties remains a key objective for all agencies. The impact on victims and their families, as well as our health system are enormous."

As part of maintaining its highly visible presence, Police will also be trialling red and orange highway patrol vehicles, to be rolled out over the next year as older vehicles become due for replacement.

"Their purpose is to provide a strong visual reminder of the Police presence on our roads and to provoke public debate, as agencies work together to improve road safety," Mr Cliff says.

Chair of the National Road Safety Committee, and Ministry of Transport Chief Executive, Martin Matthews, supports the campaign. “All of the road safety partners are committed to reducing the number of deaths and serious injuries on our roads.

"Road safety is everyone’s responsibility, and while the Police are stepping up their enforcement focus, it is important that all road users do their bit and look out for each other on the roads over the summer break,” Mr Matthews says.

“All road users – motorists, pedestrians, cyclists, motorcyclists – have a part to play in making sure that we all have a safe summer, by sharing the road and following the road rules. This means driving to the conditions, sticking to the speed limit and not mixing drinking or drugs with driving.”

ACC Chief Executive, Scott Pickering, says: "Motor vehicle crashes can have a tragic impact, resulting in fatalities or serious injuries that affect people for the rest of their lives.  ACC is pleased to support this campaign, encouraging Kiwis to get to and from their holiday destinations safely this summer."

NZ Transport Agency Road Safety Director Ernst Zollner says the holiday safety campaign will be welcomed by most New Zealanders. "We know that a clear majority of Kiwis support Police enforcement of speed limits to prevent crashes, and reject drink-driving as dangerous and unacceptable.

"New Zealand has made great strides in reducing deaths and injuries on our roads in the past decade, but we are still facing daily tragedies on the road. In the past 12 months more than 250 people have lost their lives on our roads, and many more have suffered debilitating injuries. That’s a situation no-one should accept, and New Zealanders are looking for decisive action to reduce this needless suffering.”

"Travelling over the open road speed limit not only puts you at a higher risk of a crash, it also makes you use more fuel. A 10% increase will cost you another 20 cents on every litre of petrol you use."