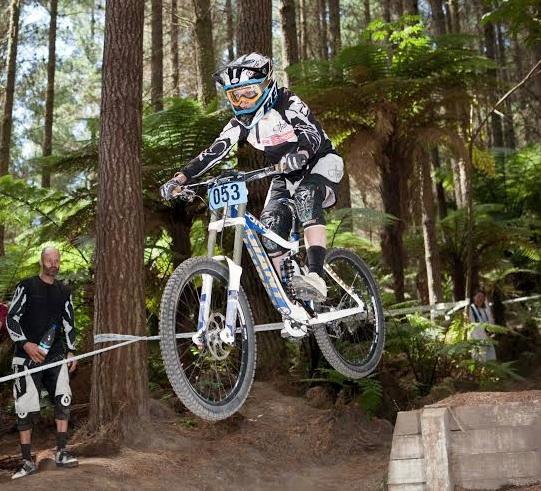 Cam and Amy Cole will be attempting to become the first husband and wife pair to win New Zealand Mountain Bike titles in Rotorua this weekend.

They would likely settle for strong performances in the downhill competition on Sunday after Cole, the former junior world champion, spent much of last year recovering from a serious crash on the UCI World Cup circuit.

New wife Amy Cole (nee Laird) won the downhill title in Rotorua last year while her partner bypassed the event as he prepped for a full season on the UCI World Cup circuit. This ended in disaster when he suffered a compression fracture of his vertebra in Andorra and was airlifted from the course.

The pair is among a world class list of riders for the national downhill championship to be held on the famed Taniwha National Downhill Track used for last year’s event, following Saturday’s cross country championships.

Added to the potential challengers include Matt Walker, Louis Hamilton and Matt Scoles in the elite men with a bevy of talented young internationals also looking to show their hand in this top-notch field.

Laird, very much a part-time rider these days, will still pose a serious threat in the women’s competition where Queenstown’s Alanna Columb  will be the favourite after an outstanding effort to finish in the world’s top-20 in her first full season on the UCI World Cup circuit in 2013.

Others to watch include recent mountain bike cup winner Meg Bichard, Sarah Atkin and Sophie Tyas.
There would be plenty of support for Cole to prosper in his comeback race.

“It has been all go and all moving in the right direction. I am really positive about this year,” Cole said.
In recent times Cole has be mentored by Irish-born, French-based coach Chris Kilmurray, who is a noted fitness coach, who has taken the Kiwi to another level.

“I recovered remarkably quickly because I was so fit. I’m back on my bike and surprising myself how well I am going.”

The 26 year old began with a strong qualifying effort in Christchurch but crashed in the final run, without serious blemish. The second round of the Mountain Bike Cup in Nelson saw him qualifying solidly but he was not as happy with the final.

“I am building and I think I am quite competitive. This has all fuelled the fire really and I am looking forward to Rotorua and the national championships. ”

Cole has every right to feel confident in the spiritual home of mountain biking. After moving to the Waikato, Cole then spent much of his developing years in the Rotorua forests on his bike, and it was there he won the world junior downhill title in 2006.

“I know the area and the tracks so well. I’ve had great success there and I am feeling good about the national championships. ”

Racing for the gravity riders on Sunday starts with timed seeding runs from 11am and racing from 1pm.
The New Zealand Mountain Bike Championships in Rotorua is the headline event of the opening weekend of Rotorua’s annual 10-day bike festival, beginning with the cross country racing on Saturday from 10am (elite race at 2pm).

There’s a raft of events in mountain bike, road and BMX, both serious and fun during the Rotorua Bike Festival from February 14 to 23.