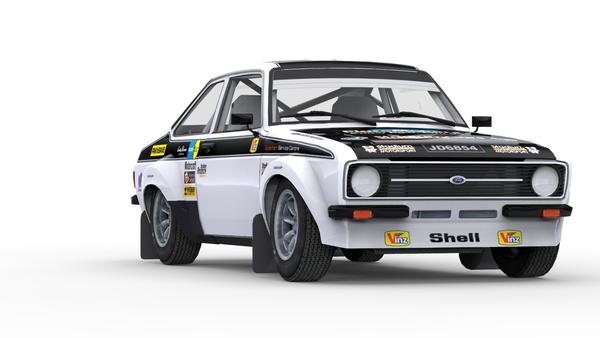 The Stadium Finance BDA Escort that Hayden Paddon will drive in the Otago Classic Rally with a new co-driver Malcolm Read next month CREDIT: Jack Hintz

For the 9 to 11 May event, Paddon will be back behind the wheel of the Stadium Finance BDA Escort that he last drove on the event two years ago. However, for one of only a handful of times in the last eight years, New Zealand’s top rally driver will not have regular co-driver John Kennard in the opposite seat. Instead young, up-and-coming Kiwi co-driver Malcolm Read gets the nod to read the notes for Paddon in Otago and thus takes the first steps in a new partnership with Paddon and Kennard where he will be involved in their WRC campaign later in the year.

“Malcolm Read is stepping into the car with me for Stadium Cars Otago Rally as a way to begin working with the team in the longer term. Later in the year he will join us on WRC events to assist with our gravel notes and John has already taken Malcolm under his wing to start passing on his wealth of knowledge. Together, the team seeks to help Malcolm develop into a world class co-driver,” Paddon said from his base in Frankfurt, Germany.

Read (25, from Hamilton) has risen through the ranks of New Zealand rallying over the past few years after championship campaigns in New Zealand and the Asia Pacific, as well as some European events.

Kennard says: “I’ve been involved in the sport for over 35 years and see this as a great chance to give something back and help the next generation of co-drivers.

“Of course both Hayden and I are focused 100% on the job ahead of us this year in the WRC with the Hyundai i20 WRC, but at the same time, it is good to add another step towards helping create a tiered system of learning that could take young Kiwi co-drivers all the way to the top.

“It’s always been a key factor of Hayden Paddon RallySport Global (HPRG) – to try and help with the development of other drivers and co-drivers, drawing on our international experience from all the levels of the World Rally Championship that we’ve contested.

“Hayden mentors Tauranga rally driver David Holder, and now I will be encouraging Malcolm’s development into a WRC-standard co-driver. It is a great challenge and fantastic to have Malcolm involved in our programme.”

Read is understandably excited about the opportunity ahead of him and also comprehends the sheer volume of hard work needed to succeed in world rallying.

“This is a fantastic opportunity and it’s amazing that both Hayden and John are willing to support my development in the sport. Obviously it will be very important for me to learn as much as I can this year,” says Read, who won the FIA Asia Cup for Co-drivers alongside Opotiki’s Michael Young last year.

Read adds: “I’m really looking forward to Otago where I’ll be learning and using Hayden’s pace note system for the first time. Thankfully John will be with us on recce and in the service park to guide me through it. It’s going to be an exciting weekend!”

Looking to the rally itself, Paddon is pleased to get his first competitive outing for the 2014 season. Paddon and Kennard took the overall victory in Rally Otago last year in the team’s famed green Evo9 rally car.

“It’s great to return to the classic rally field – I’ve competed in this just once before, in 2012, when John and I had a puncture which cost us seven minutes while leading the classic field,” Paddon says.

“This time, equipped with the right tools and with more experience driving the rear-wheel-drive BDA, I’m really looking forward to the whole event and to working with Malcolm for the first time. A big thanks to Tony Gosling from Stadium Finance for giving me the opportunity to drive his car again. As every rally fan knows, the BDA Escort is an iconic car in the history of rallying and even 30 years since the first BDA, they are still one of the fastest 2WD rally cars and a heap of fun to drive on some of my favourite rally stages in the world.

“The car also has a few new upgrades compared to when I last drove it, including MCA suspension, so it should be a dream to drive.”

“The Stadium Cars Otago Rally will be a good chance to get back into the rhythm of rallying again as it’s been over six months since our last event. Despite the car being quite different to what we will drive in Rally Sardenga a month later, every kilometre behind the wheel provides a good warm-up for doing reconnaissance, writing pace notes, the timing and speed of an event overall.”

Paddon adds: “It is going to be a fast rally this year, with some very good competition and some fast public road stages around the Lawrence region that have not been used before. I can’t wait.”

Following reconnaissance of the rally route on Thursday and Friday, the rally gets underway with a motor show and ceremonial start in Dunedin city on Friday evening. Day one, Saturday, takes competitors south-west of Dunedin using six spectacular and fast public road stages between Milton and Lawrence and concludes with the ever-popular super special stage in downtown Dunedin. Day two, Sunday, takes in eight stages to the south of Dunedin including the legendary ‘Kuri Bush’ and a welcome return to the Berwick Forest. A total of 286 km of special stages will provide a huge challenge.

Paddon and the HPRG team appreciates the support of their exclusive partners VINZ New Zealand, PlaceMakers and Pak n’ Save along with associate support from Z Energy, Scott Sports and New Balance. The team’s entry into the Stadium Cars Otago Classic Rally has been made possible thanks to Stadium Finance.