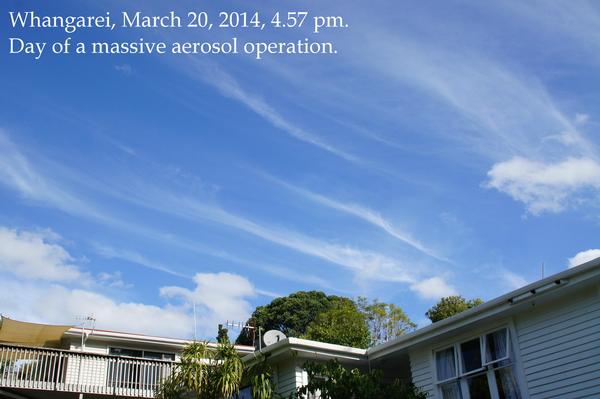 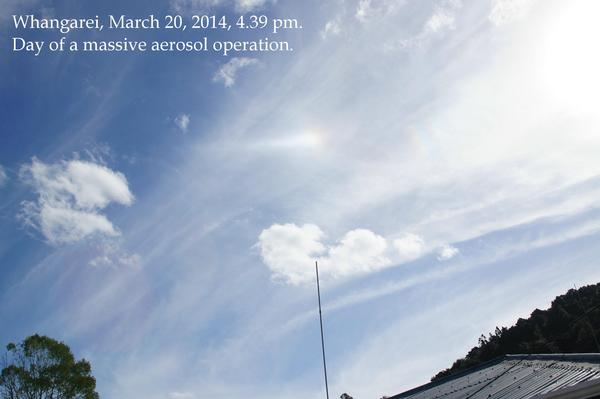 Waking Up Farmers in Dargaville To Likely Cause of The Drought

On April the 2nd, the Northern Advocate quoted Nathan Guy, Primary Industries Minister, who has advised that Northlanders were to expect more dry spells owing to climate change.  As is to be expected, the corrupt mainstream media failed to refer to the elephant in the living room – it did not mention a word about the masses of aerosols/chemtrails that can be seen regularly now in Northland skies, both from the ground and in satellite imagery.

What effect will these aerosol trails have? It is elementary according to an article dated March 10th, 2000, on the BBC website, titled:  'Air pollution stops rain'.    This mentioned research conducted by Daniel Rosenfeld that showed that pollution particles led to abnormally small droplets that were far too small to fall to Earth.

It is easy to see where all the "pollution" is coming from in Northland.  Numerous aerosol trails are evident overhead and rainwater tests conducted by RJ  Hill Laboratories have found aluminium, barium and strontium present in the rain.

Activists, Toni Anne Smith & Clare Swinney traveled to Dargaville on April the 6th, 2014 and distributed information regarding chemtrails/weather modification technology to farmers, and did the job the mainstream media should be doing.  They put up posters in the township and distributed information, including copies of ">Why In The World Are They Spraying? (2012) to people in the farming community, regarding the likely cause of their latest drought and the droughts of early and late-2010 and 2013.

Here are a few photos and video clips of the trip: ">Watch video here:

Dr Joe Golden of the American Meteorological Society talks about how aerosols/chemtrails can be used to manipulate the weather: https://www.youtube.com/watch?feature=player_embedded&v=lPbuOMSlDbA