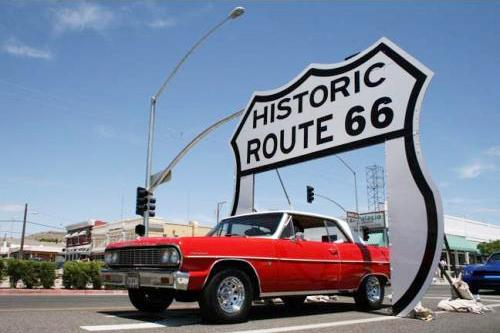 A month-long trip tracing America’s famous Route 66 behind the wheel of a Ford Mustang is the stuff of dreams – yet that’s exactly what a lucky show-goer is going to win at this year’s CRC Speedshow at Auckland’s ASB Showgrounds over the weekend of 19-20 July.

The trip for two is worth $23,000 and is the biggest-ever door prize for New Zealand’s largest annual automotive and motorsport show which runs for the eighth time in 2014.

The Route 66 trip prize has been put up by Classic Driver magazine, co-sponsor of the new Classic Cover Insurance Classic Car show-within-a-show. The new classic vehicle show will feature around 45 hand-picked classic cars and motorcycles in their own dedicated hall (Hall 6) and Classic Driver magazine publisher Wes Davies says he wanted a “really special” door prize to draw attention to it.

“Route 66 is America’s ‘mother road’ and it has a near mythic status all over the world. Anyone with an interest in classic cars or motorbikes will tell you that a trip on it – from Chicago to Los Angeles – is on their bucket list,” Davies says.

The prize draw is open to anyone 25 years of age or older who attends this year’s CRC Speedshow and correctly fills in the entry form. The winner and their nominated partner then join 11 other couples on one of two Route 66 tours from Chicago to Los Angeles in 2015.

Davies explains that the tours are guided by Route 66 expert Roger Allison and virtually everything – return air travel from Auckland or Christchurch, all accommodation and breakfasts and the hire of a convertible Ford Mustang complete with radio telephones and pre-programmed GPS units – is included in the prize.

Along the way the lucky door prize winner and his or her traveling companion will get to see and experience all that is good about a top-down cross-country road trip in the United States, from the opportunity to visit museums and places of interest along the way to spending two nights in Las Vegas and visit the Grand Canyon and Hoover Dam.

“It’s fantastic, isn't it, and I can’t thank Wes enough for putting the Route 66 trip up as our door prize,” says CRC Speedshow director Ross Prevette. “I don’t think there could be a better or more appropriate way to promote the new classic component of the 2014 CRC Speedshow.”

Back by popular demand in the Ideal Wheels live action arena is the Celebrity Kart Challenge organised by Auckland kart shop Right Karts, while making its debut at this year's show is the inaugural New Zealand Indoor Offroad Championship run by the North Harbour Radio Controlled Car Club.

The CRC Speedshow website, www.speedshow.co.nz, is updated on a regular basis with the latest news on special vehicles, guest appearances from VIP drivers and riders and competitions. You can also sign up for regular newsletters and get all the news direct to your inbox, or find Speedshow on Facebook, Twitter, YouTube and Pinterest.