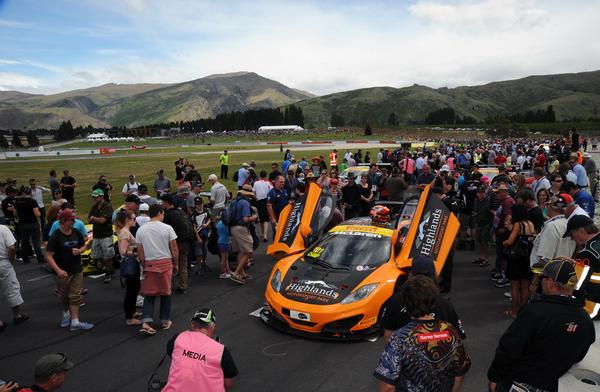 With the dates for the second running of the Highlands 101 now set for 7 to 9 November this year, Highlands Motorsport Park owner and winner of the inaugural Highlands 101 Tony Quinn says: “Bring it on!”

“We’re absolutely delighted to field calls from interested competitors wanting to know if their car will be eligible for this year’s Highlands 101,” says Quinn. “There’s something about this race format which has really captured people’s imagination.”

The Highlands 101 race features a modern take on the famous Le Mans running start and compulsory pit stops for its starting line-up of up to 42 cars which race for 101 laps, or around three-and-a-half intense and gruelling hours, on the 4.1 kilometre circuit.

November’s Highlands 101 event schedule includes the 101-lap endurance race as well as the season finale for the Australian GT Championship, presented by Pirelli, plus racing from other categories yet to be decided.

Highlands’ general manager Mike Sentch says: “We’re excited to welcome competitors in the Australian GT Championship back to Highlands as they contest the final two races of their championship season. The feedback we had from the teams last year was overwhelmingly positive – they loved the venue, the race track and the region. It’s fair to say that, in return, Kiwi motorsport fans loved seeing the GT sports cars – Ferraris, Lamborghinis, Aston Martins, Porsches, Audis and more – in action on New Zealand’s newest and longest race track.”

“Along with the established Kiwi stars like Greg Murphy, Craig Baird and Fabian Coulthard, we hear V8 Supercar star Craig Lowndes is a possibility – undoubtedly a very popular competitor who many fans will be delighted to see race at Highlands.

“With up to 42 cars in the Highlands 101 starting line-up, most will come from the Australian GT field and we’ll soon provide information about the eligibility criteria for the others who are interested in competing,” says Sentch.

The Highlands 101 name is being adapted for the weekend’s other key races, such as the 1+01 which is a one-hour-plus-one lap invitational race, and the 10+1, an eleven lap race for the yet-to-be-decided category.

To date, Highlands Motorsport Park has hosted around three big motor racing events each year and each of these has attracted many thousands of fans and hundreds of corporate guests. Sentch believes November’s Highlands 101 event will again see a sold-out array of corporate suites.

“We’ve been delighted with the positive feedback we’ve had from our corporate guests. The combination of our stunning setting here just outside Cromwell, the beautifully-presented facilities that we all take such pride in, the complexities of the 13-corner main circuit, and the glamour of supercars racing at full speed creates a fantastic spectacle whether or not you’d class yourself as a petrol-head. The Highlands 101 offers a truly unique entertainment experience for corporates, large and small, as well as those who like to be close to the action from the many spectator viewing areas around the circuit,” Sentch says.

For more information on the Highlands 101 and all regular Highlands Motorsport Park facilities, please visit the website www.highlands.co.nz or the venue’s Facebook page https://www.facebook.com/HighlandsMotorsportPark.