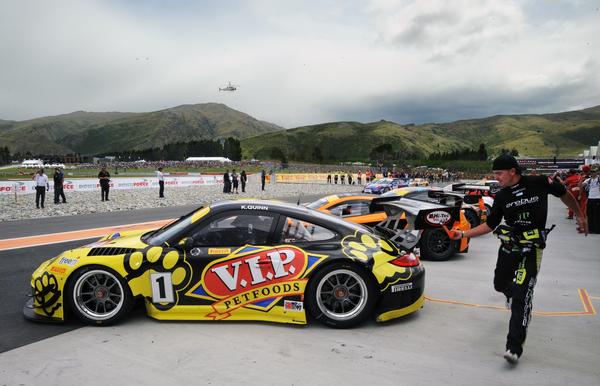 Star Kiwi driver Craig Baird shows his speed on foot during the Le Mans-style start of the Highlands 101 race, with the race format now being used for an Australian GT Championship race for the first time. CREDIT: Highlands Motorsport Park/John Morris

Australian GT series organisers and teams were keen to see an endurance format event included in the 2014 calendar and, following the success of the Highlands 101, elected to adopt the 101 format for their second championship round which starts today, 23 May.

Australian GT category manager Ken Collier says: “We wanted a good mix of sprint and endurance races, because teams were telling us that the longer races were something they were keen to pursue. By the look of the entry list for this round, they clearly stood by their words.”

A total of 26 cars are entered for the Phillip Island 101, further proof of the ongoing success of the series as well as the popularity of this endurance race format.

Tony Quinn, owner of Highlands Motorsport Park and winner of the inaugural Highlands 101 with co-driver Fabian Coulthard, is pleased to see the 101 format adopted for the Phillip Island championship round.

“The Highlands 101 format was a new concept as a standalone endurance race and it worked exceptionally well, bringing the exciting sports cars of the Pirelli-backed Australian GT Championship to New Zealand for the first time. I’m looking forward to racing the 101 and judging by the impressive field of 26 entries, my fellow competitors are too,” says Quinn who’ll be partnered by three-time Bathurst 1000 winner Garth Tander in the VIP Petfoods Aston Martin Vantage. Tander jumps into the seat vacated by fellow V8 Supercar regular Fabian Coulthard who is otherwise committed, preventing he and Quinn from taking back-to-back 101 wins.

Kiwi fans will want to watch out for Baird who’s racing in the Australian GT 101 race with Klark Quinn in the McLaren MP412C GT3 as well as two Porsche Carrera Cup Australia ProAm one-hour races with co-driver Max Twigg. Daniel Gaunt joins Jan Jinadasa in a Lamborghini Gallardo LP520 in the Australian GT 101, and Jono Lester and Simon Ellingham are hunting a GT Trophy class victory in the Fastway Couriers Porsche 997 GT3 Cup.

More information about the Australian GT Championship and the Phillip Island 101 available is on www.facebook.com/AustralianGT or www.australiangt.com.au.

The Highlands 101 remains a standalone endurance race with dates for the 2014 event recently confirmed for 7 to 9 November with the field of up to 42 cars largely made up of Australian GT competitors and other eligible vehicles. For more information on the Highlands 101 and all regular Highlands Motorsport Park facilities, please visit the website www.highlands.co.nz or the venue’s Facebook page https://www.facebook.com/HighlandsMotorsportPark.