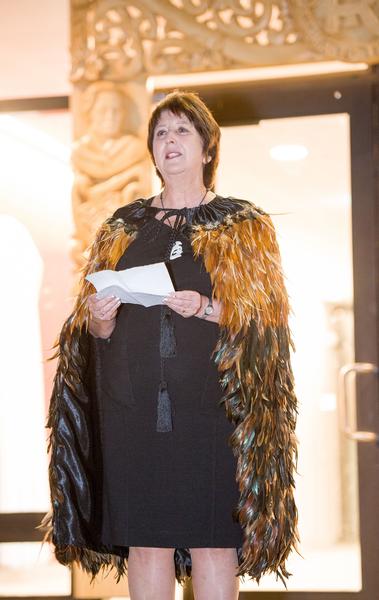 It was a perfect warm and still morning for the official opening of the new Mana Wāhine building at Rangi Ruru today.

Ngāi Tahu Kaumātua Sir Tipene O’Regan led the ceremony at 7am, blessing and opening Mana Wāhine, which is the third new building to open on the campus in the last seven weeks.

The Gibson Centre and Science Centre opened in early April.

Principal Julie Moor told gathered students, parents, board members and members of the community that the opening of Mana Wāhine sees “the completion of a trilogy”. She paid particular tribute to “the people who have turned dreams and drawings into reality”.

“I am talking about the team from Leighs who have worked simultaneously on three very different buildings, in close proximity, sometimes in horrible weather, under very tight timeframes and with minimum impact on the school operation. We enjoy working with them and we thank them. They have become part of the Rangi family.”

Old Girl and artist Peg Moorhouse who travelled from Marlborough, explained the silk and wool wall hanging which has been hung in the entrance of Mana Wāhine (see attached pic) to Sir Tipene and Julie Moor, highlighting the vertical strands as being indicative of the journey the girls will make in their lives.

Another special feature in Mana Wāhine is the stunning Maori carving by Riki Manuel which surrounds the front entrance.

Julie Moor says the strength and energy in Mana Wāhine goes beyond the name of the building.

“Our girls know they can do whatever they set their minds to. We are here to support them and as part of that, knowing what women have achieved at different times in our history is essential to gaining a better understanding and appreciation of where we are today,” she says. “We must never take anything for granted.”
Jean Brouwer, Rangi Ruru’s Head of Student Services, says the new building provides spaces for one on one tutoring and counselling, in addition to eight large classrooms – two for Global Living and six for Social Sciences.

“We support all levels of learning here,” she says. “Whether girls need additional support or are highly able academically, we provide what they need, and in a bright and energetic space,” she says.