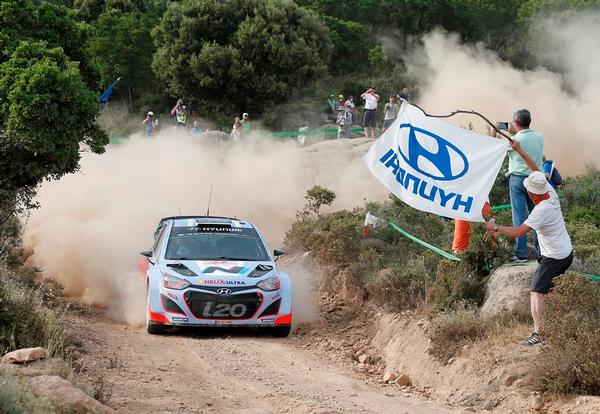 A tough day is the way Hayden Paddon described the first full day of Rally Italia Sardegna as he and co-driver John Kennard make their competitive debut with the Hyundai Motorsport World Rally Team.

Tackling 159.98 kilometres of narrow, rock-strewn roads in the centre of the island of Sardinia proved challenging in several ways for Paddon – a puncture, niggles with the gearbox, the car not handling as he’d like it to and contending with the rocks and tricky road surfaces – but despite the trials, the Kiwis finished all eight stages which was their key goal.

“It has been a very challenging day,” said Paddon from the service park on Friday evening. “We are struggling a lot and these are very, very tricky roads to be on for the first time. The pace notes aren’t working quite so well and I’m struggling to get the car to do the things I want it to do. It’s very tough, but never-the-less we’ve still made it through today which was always the number one goal for this event. It’s about getting quality time in the car. But we are making setup changes tonight to try and make some sort of improvement for tomorrow.”

And although Paddon said he wouldn’t be looking at the day’s stage times, to finish the day in 11th place overall must be pleasing.

Paddon and Kennard are also the leading Hyundai crew going into Saturday’s stage, a bittersweet result when teammates Thierry Neuville and Juho Hänninen set several fastest times throughout the morning’s four stages to lead the rally with a Hyundai one-two during the mid-afternoon service break. On stage five, an unfortunate mechanical issue stopped Neuville for some time and although he’s still in the rally, he’s some way down the leader-board. On the same stage Hänninen rolled and is unlikely to restart.

During the day, Paddon commented that the Sardinian rally is the most difficult he’s ever contested. This is the first time he’s driven the Hyundai i20 WRC car in competition and the first time he’s competed in this event, which is the sixth round of the 2014 FIA World Rally Championship.

“We were thrown in at the deep end on these roads. For the first time on a rally, this one has to be the most challenging I’ve done.”

Paddon and Kennard are known for their perseverance, so they’ll undoubtedly approach Saturday’s 156.80 kilometres and its two runs through two stages, which include the massive 59.70km Monte Lerno, with the determination to finish the day and continue learning all they can about the event and the car.