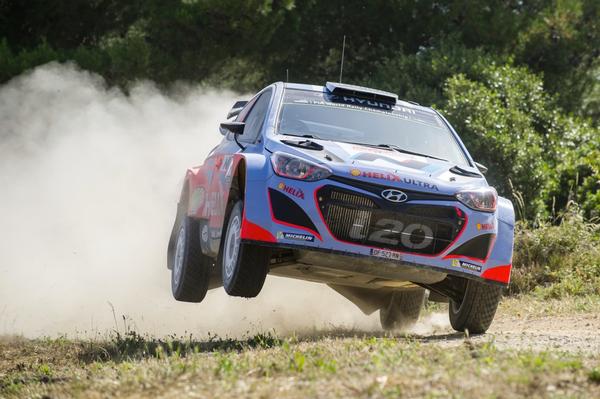 While the results spoke volumes of Paddon’s determination and mature approach, as well as the team’s hard work in getting the Kiwis restarted for Sunday’s final four stages, the real emphasis for Paddon’s first event in the Hyundai i20 WRC car was on seat time and driving virtually every stage of Rally Italia Sardegna from start to finish in order to gain valuable data about the car to contribute to the team.

Rally Italia Sardegna, the sixth round of the 2014 FIA World Rally Championship, was just the sixth WRC event contested by the Hyundai Shell World Rally Team which, next week, marks its one year anniversary of the official inauguration of Hyundai Motorsport’s facility in Alzenau, Germany. The team’s objectives for the entire 2014 season are to build up experience in a competitive rally environment and adapting the Hyundai i20 WRC car performance to the particularities of each stage and each rally – and Paddon and Kennard were pleased to contribute their efforts to the team’s learning and development.

Speaking after the finish ceremony for, Paddon said: “It was good to get to the end of the rally. It’s obviously been very challenging but to get through the stages and get some valuable time in the car is going to help us a lot so we can more forward from here.

“It’s been great to be in the car; we’ve learned a lot, we’ve got a lot of data and information to take away from this and we’re going to work hard for Poland, an event which is new for a lot of people which will help us. It’s been a good weekend all in all.”

“It went really well,” said the Blenheim-based co-driver. “It’s a really technical event and we’re here for the first time. Hayden’s driven it well, he’s learnt things and he’s carried on progressing all the way through the event.

“Overall it was pretty much a perfect event for us. Sure it was a pity we stopped for a while in one stage, but these things always happen so we’ve got over it, got out today and done some good times again.”

Having finished Saturday in 13th overall based on the assigned time received when an engine misfire meant the team asked Paddon to stop and not complete the day’s final, very long stage, Paddon and Kennard started Sunday fourth on the road.

The Kiwis took their best stage ranking of the event through the 8.98 km Cala Flumini stage with a fifth quickest time, just 0.5 sec slower than team-mate Thierry Neuville. Paddon’s comment was: “Very slippery in here, there’s a lot of loose gravel.”

The Kiwis then continued steadily through the remaining three stages to finish their first rally in the Hyundai i20 WRC in 12th place, which also made them the leading Hyundai in only the sixth event that the team has contested.

Team Principal Michel Nandan said: “We have had a busy, tough but ultimately very productive rally here in Sardinia. We are not competing this year for stage times but to develop our Hyundai i20 WRC for each rally. Of course, it is nice when we show competitiveness, as indeed we have done in several stages this weekend. This Rally Italia Sardegna has been particularly tough and in some extremely hot temperatures. The team has done a fantastic job, working really hard and we leave here with lots of motivation for the next round in Poland. Thierry and Hayden have done a professional job today and we have used the final stages of the rally to learn more about the car. It is obviously a shame we couldn’t finish with all three cars but we still leave here with lots to discuss back at the factory to prepare for Poland.”

Rally Poland has not featured in the WRC since 2009 so virtually all drivers will be in the same position as Paddon and Kennard, having to write new pace notes and tackle the event with no previous experience. The rally crosses into
Lithuania and has very fast roads which will see speeds approach those of Rally Finland. The Hyundai Motorsport drivers, including Paddon, completed their official test in Poland a few weeks ago and look forward to further improvements and development opportunities during the 27-29 June running of the Polish event.