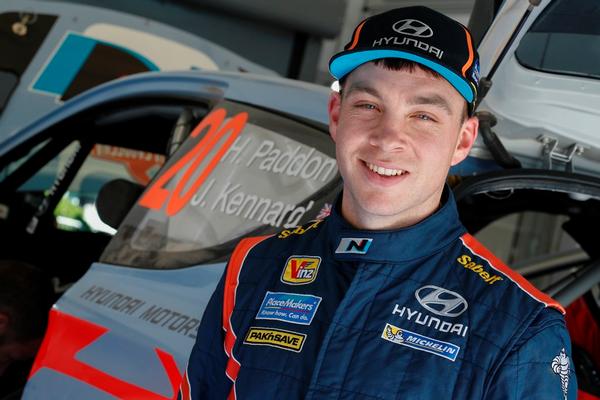 Top Kiwi rally duo Hayden Paddon and John Kennard are looking forward to getting back into their Hyundai i20 WRC car as they contest Lotos Rally Poland for the first time from 26 to 29 June. CREDIT: Hyundai Motorsport/McKlein Images

Top Kiwi rally duo Hayden Paddon and John Kennard are looking forward to getting back into their Hyundai i20 WRC car as they contest Lotos Rally Poland for the first time from 26 to 29 June.

In contrast to their successful debut with Hyundai Motorsport in Rally Italia Sardegna earlier this month where Paddon and Kennard were also contesting the challenging event for the first time, they aren’t the only World Rally Championship crews making their maiden run on Poland’s fast, flowing gravel stages.

“The Polish event was last part of the WRC in 2009 and while some drivers have done this event as a round of the Intercontinental Rally Challenge (IRC) or the European Rally Championship, unlike most other events, it is relatively new for most of our competitors,” says Paddon from his base in Frankfurt.

“This makes is a real leveller, particularly for us as John and I are the new boys on the block. I’m really looking forward to Poland – the stages are really fast, a bit like Finland with the main difference being the road surface which is quite soft and sandy. We saw in testing that on the repeat run, the stages will get very rough and cut up, so that’s a consideration.”

Analysing their opening event with Hyundai where they finished a very credible 12th place overall, Paddon says of his and Kennard’s performance: “From reviewing the data and on-board footage, it’s clear that I was committing to the pace notes as much as I normally would, taking into account the mix of it being a new event, writing new pace notes and not having the optimal set-up for the conditions.

“The pace note problems in Sardegna are very specific to that event. It was very technical; there are a lot of changes in rhythm and grip levels and you need a lot of information. Some of this also comes down to a lack of experience of such a unique event.

“But this is all information I can use to improve for future events and for when we hopefully return to Sardegna next year.”

Paddon tested the Hyundai i20 WRC in Poland with the team prior to Sardegna, a fact which should be beneficial for the 27-year-old from Geraldine in New Zealand’s South Island.

“It is definitely a help to have more of an idea on what sort of conditions to expect. However the set-up we worked with at our Poland test didn't work in Sardegna, and now we are going down a different road, so a little blind but we think it will work.”

Talking of goals for the Polish event, Paddon says: “These first few events are all about learning – the team, the car, and the events – but we’re also bench-marking ourselves against our team-mate Thierry Neuville. In Sardegna, on average, we were 0.75 seconds per kilometre slower than Thierry. For Poland, our goal is to reduce this to 0.5 s/km. Of course if we can also finish the event, as we did in Sardegna, that would be great to help aid our and the team’s learning process.”

Speaking to wrc.com this week, Paddon also said: “It’s going to be a good experience for us because I enjoy writing notes on faster events and then committing to them. I think we can be a lot stronger in Poland.”

Poland marks the mid-way point of the current FIA World Rally Championship season and with new ‘everything’, the gravel rally is based in Mikolajki, several hours north of Warsaw, in the Masurian lake district. With 1,500 km in total and 350 km of competitive tests broken into 21 stages, it starts on Thursday afternoon with three stages, including one in the dark. Friday’s route includes a morning test and two evening stages in Poland broken by four stages in Lithuania where competitors remain on Polish time. This is the first time Lithuania is part of the WRC itinerary, making it the 32nd different country to feature in the championship. Saturday’s itinerary has 10 stages with a final four stages wrapping up the action on Sunday. The Mikolajki Arena hosts competitors each day to contest the super special stage where two cars will be on track at the same time. Results and other event information can be found on WRC.com.