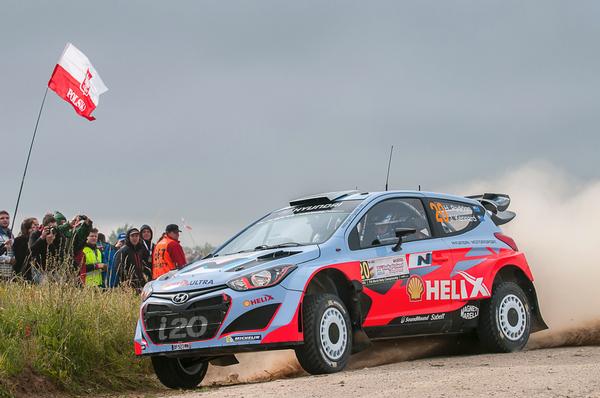 The New Zealand crew of Hayden Paddon and John Kennard have started strongly in their first attempt at Lotos Rally Poland, joining their Hyundai Motorsport teammates in the top seven overall after the event's first day of competition. CREDIT: Honza Froněk

The New Zealand crew of Hayden Paddon and John Kennard have started strongly in their first attempt at Lotos Rally Poland, joining their Hyundai Motorsport teammates in the top seven overall after the event’s first day of competition.

Competing in just their second event as the Hyundai Motorsport N entry in the 2014 FIA World Rally Championship, Paddon and Kennard successfully completed the opening three stages of the Polish event with what Paddon described as ‘encouraging stage times’. Their pace sees the Kiwis seventh overall, just two seconds behind their Hyundai teammate Thierry Neuville while the third Hyundai driver Juho Hänninen is fourth overall, having won the second special stage.

“We took it calmly today and drove well within our limits. Certainly the stages suit me better and the times have been much improved from Sardinia. We definitely learned a lot in Sardinia and we have tried to carry that knowledge over into this rally to close the gap to Thierry and Juho. I think we have achieved that today with three encouraging stage times.

“We’re sitting in seventh at the moment which is more than we expected. To be only two seconds behind Thierry is great, but obviously there’s a long way to go. The car has been working well and we have plenty more to come so it’s not too bad at all for a Thursday. We will sit down with the engineers this evening to plan tomorrow’s stages, which includes a remote service and four stages in Lithuania, which will be an enjoyable challenge for us.

“Saturday’s a big day as well so we need to, step by step, keep improving, keep learning. We’re driving well within ourselves at the moment, so it’s a matter upping the ante and picking a couple of stages that suit us to have a good push on and on the other stages we need to be sensible. All in all, going well so far and looking forward to tomorrow.”

Paddon is clearly enjoying the fast roads of the Polish event. Commenting after Thursday morning’s shakedown stage, he said: “Reconnaissance went really well and the roads are looking great; really, really fast which I absolutely love. We were able to confirm a good car setup at shakedown this morning. I’m feeling really good in the car and really loving the fast stuff which is really important here that we’ve got good confidence in the car at high speeds.”

Looking ahead to Friday and Saturday’s seven and ten stages respectively, he added: “The big challenge here is just how soft the roads are. They are going to cut up a lot especially on the repeat stages, and just knowing how much they’re going to cut up is the big unknown at this stage. In the meantime we need to make the most of the first loop of stages when it’s not so rough.”

Team Principal Michel Nandan commented: “All three drivers – Thierry, Juho and Hayden – have started this first day of three stages with the correct approach and mentality. Some of these stages are fast and tricky so it required a sensible strategy. The Hyundai i20 WRC cars have performed within our expectations and we have not encountered any issues. It’s nice to see Juho take a stage win in SS2 but more importantly we have all three cars through the first day and lots more to learn and achieve tomorrow.”

The gravel Polish rally is based in Mikolajki, several hours north of Warsaw, in the Masurian lake district. Friday’s route includes a morning test and two evening stages in Poland broken by four stages in Lithuania where competitors remain on Polish time. Saturday’s itinerary has 10 stages with a final four stages wrapping up the action on Sunday. The Mikolajki Arena hosts competitors each day to contest the super special stage where two cars will be on track at the same time. Results and other event information can be found on WRC.com.