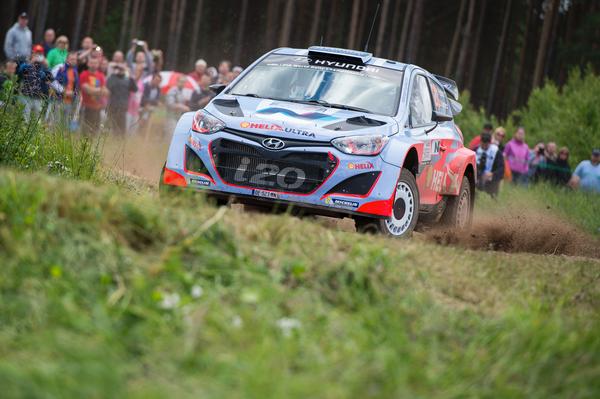 Hayden Paddon and John Kennard impressed many with their pace on the opening stage of day two of WRC Lotos Rally Poland. CREDIT: Honza Froněk

Hayden Paddon and John Kennard impressed many with their pace on the opening stage of day two of WRC Lotos Rally Poland. Piloting their Hyundai i20 WRC car in just their second event with the Hyundai Motorsport team, the Kiwis were second-quickest and just 0.7 seconds off stage winner Andreas Mikkelsen through the 12.89km stage.

Smiling as he spoke to reporters at the end of the stage, Paddon said of his career-best time: “It’s very surprising. The driving wasn’t too good and I thought I was driving like a pansy! The notes were too slow.”

The 27-year-old’s more considered response later in the day was: “I have been feeling comfortable in the car during the smooth stages and could get up to a good low-risk speed. I was pleased to set the second fastest time in this morning’s first stage considering we still had pace in hand.”

Paddon and Kennard ran 13th on the road for Friday’s schedule of seven stages – three in Poland and four in Lithuania – with the starting order decided by drivers’ championship positions. This road position worked in their favour on the day’s opener, the Polish gravel stage swept clean by the front-runners. But on the softer, tree-lined roads of Lithuania, the Kiwis faced rutted roads which deteriorated with every passing competitor ahead of them. In fact, the conditions got so bad that the repeated run through the two Lithuanian stages was cancelled.

“The following two stages could not have been more different, quite difficult. It’s been a lot rougher here in Lithuania, a lot of deep ruts and a lot of sand and I’ve really struggled in those conditions. But the feeling in the car is good; it’s going great and we’re making improvements. It’s just a case of getting more time and more confidence.”

Paddon and Kennard’s repeated run through the morning’s Polish stage saw them a comfortable sixth-quickest and having wrapped up the evening with a 2.5km super special stage, the Kiwis finish day two of Rally Poland in 11th place overall. Hyundai teammates Thierry Neuville holds tenth after what was described as a ‘character-building day’ and Juho Hänninen holds a solid sixth place.

With ten stages ahead of them on Saturday, Paddon is feeling more positive. “Tomorrow’s stages are a bit more like the two stages we did well on today so hopefully we can be competitive tomorrow as well.

“Overall it’s been not too bad a day. On the smoother stages where I feel comfortable, the speed’s been quite good and feels nice and comfortable in the car with good, low risk sort of speed. When the road’s smooth and to my liking, we’re not too far away in terms of stage times.”