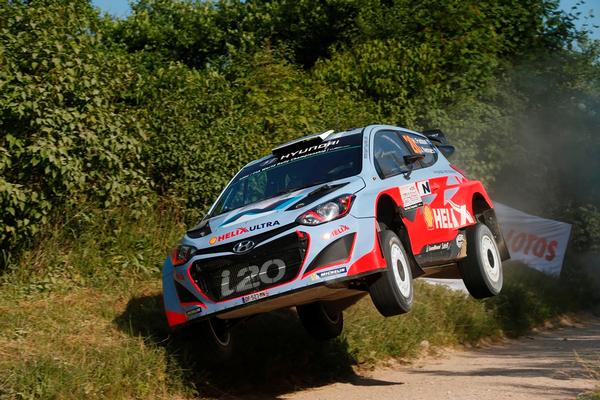 Paddon and Kennard continue to learn and improve at WRC Poland

The Kiwi crew of Hayden Paddon and John Kennard have taken a steady approach to safely complete day three of WRC Rally Poland. Their improved overall placing from 11th after Friday to seventh overall after Saturday’s long day of ten special stages is a bonus, according to Paddon.

Competing in their second WRC event with Hyundai Shell World Rally Team, Paddon and Kennard continued their own learning curve to support the team’s learning from its first WRC season. The day’s ten stages were largely trouble-free as Paddon ran third on the road and continued to assess and tweak his driving to make noticeable improvements in pace.

Speaking after Saturday evening’s run around the super special stage in the Mikolajki Arena, Paddon said: “It’s been a trying day, but not bad and there are certainly a lot of positives to take out of it.

“This morning was difficult being third on the road, we were doing a bit of sweeping and it was quite slippery. The times weren’t quite where we wanted them to be. Also, our pace notes were not working so well so we looked at the video through lunch to make improvements for the afternoon.

“This afternoon I changed my driving style a bit. We learnt where we were losing time and maybe have been overdriving the car a little bit so this afternoon it’s all been about slow entry and trying to get a fast exit and the times have improved. Our pace was definitely better. I’m fine in the smoother stages but when it’s rougher with ruts, like in the long Goldap stage, I struggle. I have to learn how to drive in these conditions but that’s part of our objective for these rallies.

“From that perspective it’s been a good learning exercise and okay, we’re up to seventh which is a bit of a bonus and now we’ve got a bigger task tomorrow to try and hold on to that. With the lessons we learned from this afternoon, a few setup changes and I think we’re up to the battle.

“For the team to have all three cars at the end of Saturday and in the top seven is a very promising aspect of our day so we will be hopeful of more improvements tomorrow.”

All three Hyundai i20 WRC cars still in strong positions on the overall classification with Thierry Neuville putting in a stellar performance to improve from 10th overall to now hold a hard-fought third place. Juho Hänninen continues to run in fifth place.

Team Principal Michel Nandan said: “It has been a generally positive day for us today with all three cars continuing into the final day. It has been a long day with some challenging stages as well as some unsettled weather in the afternoon loop. Our three crews have all handled themselves very well and we have learned a lot.

“Hayden had another solid and trouble-free day of learning and he is improving all the time, which is great to see. Overall, we enter the final day in a good position and with more to come tomorrow.”