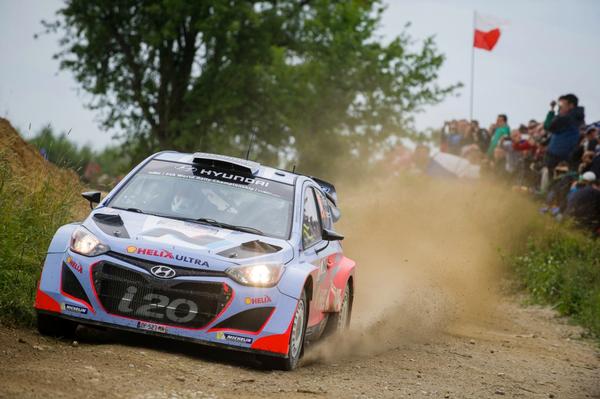 Success for Paddon and Kennard at WRC Poland

Paddon is happy with the performance improvements he and Kennard have been able to make on the Polish event, although admits his competitive nature always has him hoping for more.

“It’s great to get to the end and finish in the top ten, in eighth place, is certainly an added bonus, and it’s also fantastic to see all three Hyundai i20 WRCs finish in the top eight,” Paddon said at the event’s finish ceremony in Mikolajki in north-east Poland. “We’ve achieved all our goals this weekend and have made some really good gains from Sardinia. We’re certainly a lot closer to the leaders and a lot closer to our teammates and know the places where we can still be stronger.”

It was the first time the Kiwis had contested the Polish event, which hasn’t been an FIA World Rally Championship round since 2009, so to finish and to finish with a solid result is an achievement in itself.

Paddon says the rally, which kicked off on Thursday afternoon, delivered several challenges.

“The challenges included some very rough stages in Lithuania on Friday that were cancelled on the second run due to bad road conditions and some changeable weather on today’s final stages.

“Throughout the rally I learnt a lot about my driving and where I need to improve. On different stages I was trying some slightly different techniques, some which did and didn’t work but this is all part of the learning process. To also get so close to a stage win on stage four – just 0.7 seconds off stage-winner Andreas Mikkelsen’s time – was both a pleasant surprise but also a little frustrating to know it was so close.

“Our speed throughout the weekend was much closer to both the leaders and our teammates. Some stages where the road was smoother and more flowing, we were competitive. However, when the road becomes a little more technical this is where we are currently losing time. Having said that, we achieved our goals of a top ten finish and to close the gap to our teammate Thierry Neuville to an average of 0.5 seconds per kilometre.”

Paddon is settling in well with the Hyundai Motorsport team which is contesting the WRC for the first time in 2014.

“Overall it was a very good weekend for the team; all three i20 WRC cars finished in the top eight with Thierry Neuville third and Juho Hänninen sixth and ourselves eighth. This is a great boost for the whole team who are working tirelessly behind the scenes.”

The next WRC event is Neste Oil Rally Finland, running 1 to 3 August and Paddon feels positive about his prospects to continue improving.

“Now we look forward to Finland, which we’ve contested every year since 2010. We can use a lot of information from this event being quite similar, both fast events. And the main goal for Finland is to take the same step up again as we have here so John and I are really looking forward to that.”

Paddon returns to New Zealand shortly for a two week stint of sponsor engagements before returning to Europe to test for the Finnish event with the team.

“I’m already busting to get back in the car!”