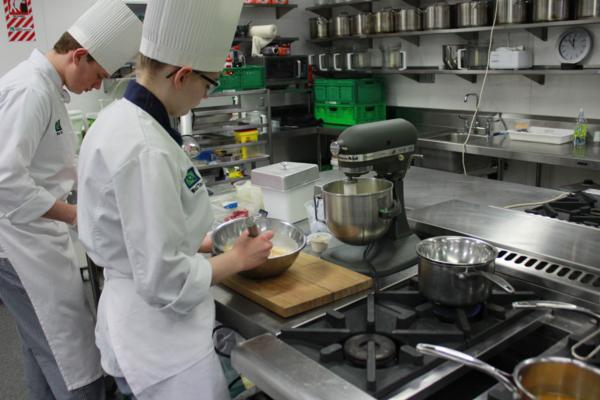 Top Hospitality students prepare to battle it out

Top hospitality students from the Wellington Institute of Technology (WelTec) are getting ready to battle it out in a live kitchen cook off that will see one team named the nation’s best in the annual Nestlé Toque d’Or competition.

Last year, a team from WelTec won three silver medals at the event.  In 2011 and 2012 WelTec took out the top awards winning the Nestlé Toque d’Or competition.  The team is going all out this year and has the top prize in its sights.

Ray Morrell who is leading the team from WelTec to the Auckland competition says, “The team is working really hard at the moment.  Chef students Ryan Bloomfield and Maxine Scheckter (pictured) are preparing dishes and practising daily.  Nicholas Abril who is a Bachelor of Hospitality Management student will provide front of house services.  Nicholas is honing his skills in WelTec’s Training Restaurant at 54 Cuba Street.”

Asked what’s on the menu, Ray Morrell is not giving any secrets away. “We’re out to reclaim the top prize.  We have the necessary ingredients and skills to achieve our earlier success.  The students are very focused on getting the dishes perfect.  This year our dishes have a global flavour and represent modern cuisine with influences that the judges will really appreciate.  Like the All Blacks, we’re bringing our A game to Auckland.

“There is also an Innovation Award this year where products are used for completely differently purposes.  We’re going for this Award as well, but how we’re doing that is top secret,” says Ray Morrell.

Now entering its 24th year, Nestlé Toque d’Or is considered by those in the hospitality industry to be the pre-eminent student culinary and front of house competition.  The title is ‘hotly’ contested by all of those who compete in it.

New Zealand Chefs Association National President and organiser of the event, Anita Sarginson, said the three students from the Wellington Institute of Technology will battle against the clock and competing teams from 11 other institutes, to be in contention for the top title.

“Each team is made up of two culinary and one restaurant service students. Their brief is to prepare and serve six covers of a three course meal within an allotted timeframe,” Anita said.  Competitors are given in advance a list of ingredients that they can use and it is up to them to create a menu that will impress the judges.  Included in this year’s line-up of ingredients are: Nestlé Professional products, fresh and seasonal New Zealand grown vegetables, New Zealand Lamb and Akaroa Salmon.