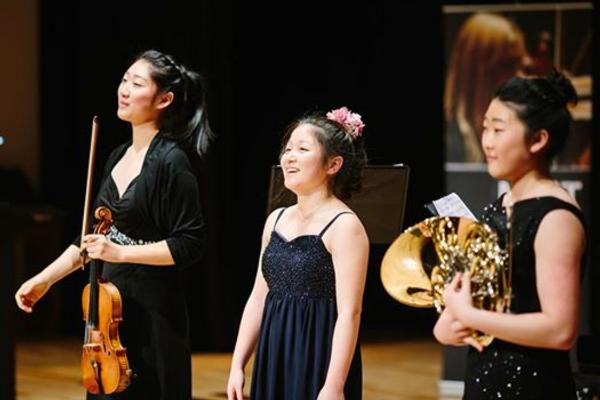 The winning group was from Auckland.

“Both groups were superb in their performances, and really lifted from the semi–finals on Friday (where they were one of 12 groups)”, said Rangi Ruru Director of Music, Janet Kingsbury

“I am so proud of, and delighted for, the girls, they have worked so hard over many months.  What was equally wonderful to see was their total enjoyment in their performances and sheer delight in every aspect of the contest – on and off the stage. The true Rangi spirit comes through, and so many people commented not only on the high quality of the performances, but of the girls’ positive and inclusive demeanour throughout the entire two days,” she says.”

This was the 49th year for competition, and many contest alumni go on to forge very successful careers as musicians both nationally and internationally. For further information on Chamber Music New Zealand visit http://www.chambermusic.co.nz/for-schools/chamber-music-contest

*Year 12 Music Scholars Grace Leehan and Geeny Moon, and Year 13 Music Scholar Siyu Sun earlier this year successfully auditioned for a highly sought after place in the 2014 NZSO National Youth Orchestra (NYO) – Grace on viola, and Geeny and Siyu on French Horn.  It is particularly exceptional for such young musicians to gain places in the NYO as it is predominantly made up of tertiary level students up to the age of 25 years.