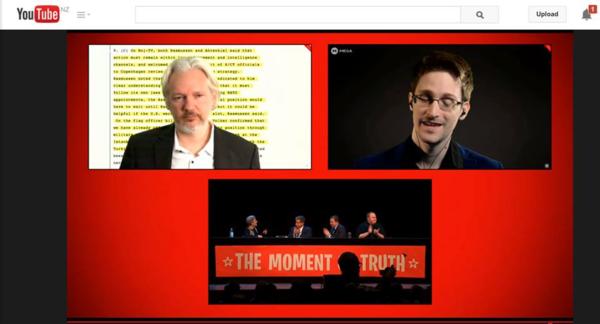 The Movement of truth

What was exposed in the Moment of truth would have been confronting to many.  Its what happens when people are not paying attention

It is important to understand the reactions, they might range from denial, attack the messenger – (always a good one to get away from the actual message)  and or dismiss and trivilize

People who have never taken much notice before or have been dismissive because they trusted the system that the PM represents, and believe deeply in that system may now feel very threatened by what was exposed last night.  l

Suddenly their reality is threatened - their whole world within a system that they truly trusted and believed - it takes a lot to penetrate such heavily entrenched support for something you thought was true your whole life so there will be defenses and attacks.

It is a natural response when things you believed in get exposed as lies and last night two of the worlds top whistle blowers Julian Assange and Eric Snowdon did a top job or telling  how it is.  These guys were  once ordinary people who realized that things were not quite right within the system and began exposing and revealing them only to be maligned  harassed and threatened by a system with ultimate power to destroy if any one exposed its secrets and lies. Witness Bradley Manning whose only crime was he had a conscience and knew that what his country was doing were perpetrating war crimes.  He was tortured and imprisoned by his own government for revealing that truth.  He is not the first and won’t be the last

The big bomb shell last night was Eric Snowdown – why ?  because he was the man who blew the whistle – he told us “……..I routinely came across the communications of New Zealanders in my work with a mass surveillance tool we share with GCSB, called ‘X KEYSCORE.”" He further detailed that “the GCSB provides mass surveillance data into XKEYSCORE….. They also provide access to the communications of millions of New Zealanders to the NSA at facilities such as the GCSB facility in Waihopai, and the Prime Minister is personally aware of this fact.”

And maybe more importantly the truth was - the rising up of the people. - Hundreds were turned away as thousands filled the town hall in New Zealand’s tiniest biggest city while many millions joined in the live stream or watched later in their own time zones

What happened last night was a powerful statement to world leaders and also to their fifth estate who will  be busily spinning counter actions to discredit the truth tellers and maintain the fiction.

With the emerging awakening of the silent majority using the internet as their front page – with its global reach nothing can be really hidden nor can it be spun without real people in real time speaking the truth in social media and sharing the truth of what is really going on – often with incredible first  hand video’s – if someone has a connection we are all connected ….and the chances of lies being exposed are growing exponentially