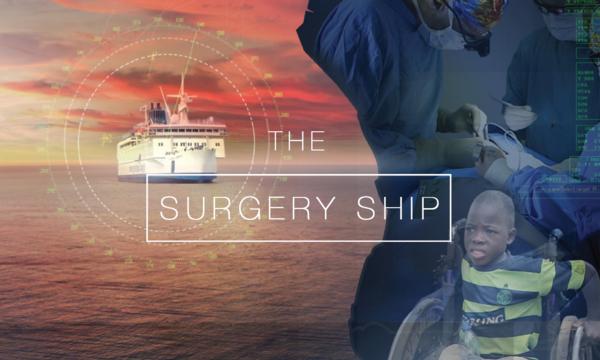 For one night only, Aucklanders will get the chance to experience life aboard the world’s largest civilian floating hospital.

On October 9th Mercy Ships will be hosting the New Zealand premiere of The Surgery Ship, an award-nominated documentary that follows the life transforming work of volunteers aboard the medical ship, Africa Mercy.

Shot on location in the West African nation of Guinea, a country where there is only one doctor for every 10,000 people, the documentary provides an unprecedented up close glimpse into the emotional and medical challenges faced by Mercy Ships volunteers and the patients they treat.

Amongst the volunteers are a team of Australasian doctors and medical staff, including Kiwi surgeon Dr Neil Thomson.

“I think about my experiences every day,” says Dr Thomson. “Once you have worked on board and been touched by these patients, you never stop thinking about it . . . you never see the world the same again.”

The volunteers treat as many patients as they can, such as Yaya, an 8-year-old boy with terribly deformed legs.  His radical surgery on board the Africa Mercy begins a process of transformation, bringing out a confident, cheeky persona and rekindling his dream of one day playing football.

Madeleine Hetherton, the film’s Australian producer/director, will be flying to Auckland as a special guest of the premiere. After the screening, Ms Hetherton will be joined by Dr Thomson for a short panel discussion on the making of the film and the on going efforts of Mercy Ships in Africa.

“The Surgery Ship is a story about the everyday heroism of both Africans and the volunteers, and the human drive to rise above circumstances, to survive, and give the best of ourselves,” says Ms Hetherton.

“There are brutal limits to what can be achieved. No matter how much they do, the line of patients at the door is unending. So this is also a story about the on-going quest to give aid and the impossibility of a quick fix in Africa.”

Around 30 New Zealanders volunteer their services on board the Africa Mercy every year, providing medical care to tens of thousands of patients in need. Due to the lack of medical services in countries such as Guinea, volunteers are often presented with conditions that are extremely rare in Western countries.

“Some of our patients have suffered enormously,” says Dr Thomson. “Not only physically, but socially and emotionally, because of the way they look; so the joy on their faces when they wake up after surgery and realise that the tumour really is gone is quite wonderful to witness.”

The documentary provides an unprecedented, up close glimpse into the emotional and medical challenges faced by Mercy Ships volunteers and the patients they treat.  Filming this intimate account was a challenging task that produced unusual obstacles for the director.

“When we were trying to get access and permission from local Guinean people to film them on the ship, we were advised of the local customs of visiting,” says Ms Hetherton.

“This amounts to arriving with about ten kilos of rice and a couple of live chickens, so many of our days started at the local market trying to source these items at a reasonable price before any other work could take place.”

Mercy Ships have been working in the world’s poorest countries for more than 36 years, helping to transform the lives of over 2.43 million people.  Surgeons, nurses and other crew all volunteer their services and pay for their own expenses.

The film, which was nominated for a 2014 Australian Directors Guild Award, has been heralded as a triumph in the Australian media, making the New Zealand Premiere an opportunity not to be missed.

Watch the movie trailer at www.mercyships.org.nz