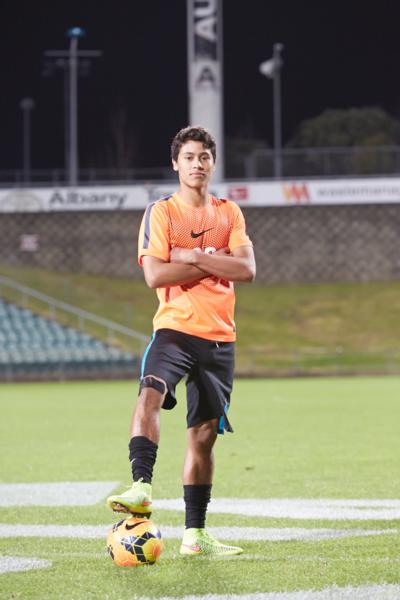 Moses Dyer, an Attacking Midfielder from Auckland, last night earned a coveted spot to take him one step closer to his dream of a playing professional football.

Dyer, 17, was selected from a pool of 60 young footballers at Nike’s Most Wanted trial in Auckland, a global football talent search that gives young players from around the world an opportunity to showcase their skills in front of elite coaches and provides a pathway to play at a professional level.

The midfielder has already had a taste of international success after representing the Pacific at the Manchester United Premier Cup Global Finals in 2011.

Dyer will travel to the UK with up to 60 players from 30 countries at the Nike Most Wanted Global Showcase on 28-30 November, where they will battle to earn a spot at The Nike Academy at St. George’s Park, the home of the England National Team. Dyer will no doubt hope to follow in the footsteps of Auckland City’s Dylan Burns, who after being selected for The Chance (now Nike Most Wanted), went on to earn a two-year scholarship at Nottingham Forest.

Nike Most Wanted Pacific Scout, Danny Hay said Dyer stood out from the talented group due to his strong possession-based game, ability to perform well under pressure and explosive speed.

“Moses’ technical skills are very strong, which meant he rarely gave the ball away, and stood out on the day. His commitment and drive was evident from the first kick off and he definitely has the X Factor.”

The timing of the Nike Most Wanted Global Showcase coincides perfectly with the conclusion of his final year at West Lakes Boys High School, so Moses plans to give it his all, to fulfil his dreams on the global pitch.

He said “My goal is to play professional football, and winning a spot at the Nike Most Wanted Global Showcase is hopefully a massive step in getting there! The competition was tough yesterday, but I really enjoyed it, and can’t wait to head overseas!”

Nike Most Wanted - previously known as Nike's The Chance - gives amateur, unsigned footballers from around the world an opportunity to earn a place in The Nike Academy at St. George’s Park, the home of the England National Team, and showcase their skills in front of elite coaches and mentors from the top of the sport.

At The Nike Academy, players experience world-class facilities, elite coaching, and input from nutritionists, psychologists and fitness trainers.  This elite program is based in the U.K. at the FA Centre of Excellence at St. Georges Park.