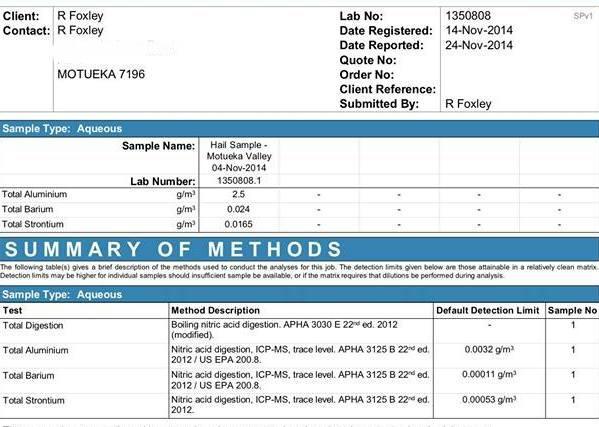 On the 4th of November, a severe hail storm destroyed apple and kiwifruit crops in the Tasman district of the South Island of New Zealand, causing extensive damage to orchards, destroying both fruit and netting.  It was a financial disaster for some of those who were hit in Motueka, Lower Moutere and Riwaka, west of Nelson where hailstones rained down for approximately 20 minutes from around 9.30pm.

One of those living in the area, Ray Foxley of Motueka, had a hunch the hail storm was “weaponized” and was used to devastate the orchards deliberately.   When asked why he thought this he replied that there were unnatural-looking cloud formations and aerosol trails apparent that day.

Evidence shows that aerosol trails are primarily used for weather engineering purposes and typically comprised of aluminium, barium and strontium,  amongst other toxins and biological components.

Consequently, in order to get evidence to support his theory that the hail storm was an act of weather engineering, not a freak natural occurrence, Ray, a member of Chemtrails over NZ,  placed a plastic container out in the hail on the night of November the 4th and collected a sample, which he videoed.

Ray thought it was odd when the hail did not melt as it normally would – perhaps owing to chemical nucleation.   “The hail still did not defrost until the next day,” he offerred. “I noticed the following day that hailstones still had not melted in some places when I drove down my road.   I thought that that was strange, as we are getting into summer now.”   Similarly, people in the US reported that some snow seemed to melt slowly.

The hail sample was sent to R J Hill Laboratories Ltd of Christchurch, a trusted lab which is accredited by International Accreditation New Zealand.  Ray asked them to test for aluminium, barium and strontium, which as mentioned are, evidence shows, the principal  components of aerosols.   He received the results on November the 24th and the lab confirmed the presence of all three heavy metals and found that the level of aluminium was particularly high.

If you drink tank water, you must take note of these results and share them with your friends, as the concentration of aluminium in Ray’s hail sample was 2.5 grams/m³, which is equivalent to  2.5 milligrams/liter!  (See the lab report below).

The Guideline Value for aluminium in the Drinking Water Standards New Zealand 2005 (DWSNZ) (Revised 2008) is < 0.1 g/m³, which Ray’s hail sample exceeds by 25 times.   Surprisingly, the Guideline Value relates to the water’s aesthetic quality, as it may not seem attractive to drink if there is too much aluminium in it.   This is in spite of the fact that aluminium is known to be highly neurotoxic and linked to Alzheimer’s disease.  Oddly there is no Maximum Acceptable Value referred to for aluminium in the DWSNZ.   Some may wrongly assume that this means that high concentrations of aluminium are safe to drink, when evidence shows otherwise.  For example, a study conducted by Trond Peder Flaten of the Department of Chemistry, Norwegian University of Science and Technology, Trondheim, Norway and titled: ‘Aluminium as a risk factor in Alzheimer’s disease’, (2001), looked at the epidemiological evidence linking aluminium and Alzheimer’s disease and found that 9 out of 13 published epidemiological studies of aluminium in drinking water and Alzheimer’s disease showed statistically significant positive relations.

Barium, which is an immune-system suppressant, is a soft silvery metallic alkaline earth metal and it should not be found in rainwater, period.  It is believed to being pumped into the atmosphere in aerosols sprayed from aircraft around the world, where it is being used for a variety of stealth warfare purposes in a silent war that is being waged against humanity.   A clue to barium’s uses comes from Bernard Eastlund’s patent for  HAARP. HAARP is a transmitter which can be used for a variety of functions, including heating the ionosphere.  It has the ability to direct a steerable electromagnetic beam at the upper atmosphere and effect rainfall (and hail) patterns in a particular region and notably, the patent calls for large clouds of barium to be released into the atmosphere.

Strontium may be being used in the form of strontium titanate, SrTiO3, as it is extremely reflective  according to retired USDA Biologist, Frances Mangels, who has been studying the changes to his local environment in California caused by chemtrails/geoengineering.

Finally, I will mention this for those new to the topic, please beware of disinformation websites such as Metabunk,  which try and pull the wool over an unsuspecting public’s eyes by advising that lab findings such as Ray’s are nothing to be concerned about.   It certainly is not OK for aluminium to be present at a high concentration in the hail like this, just as it is not OK to find aerosol trails in the sky overhead day after day.  As mentioned before on this website, we have found bright-white particles floating in the rainwater on a number of occasions in Northland, demonstrating that what we are finding is an industrial form of these chemicals, not a natural one and a whistleblower has come forward in the US and said that aluminium oxide and barium were delivered to her airforce base.