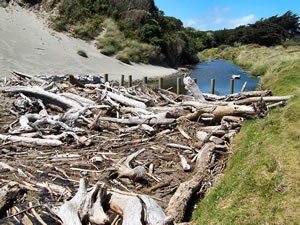 LOGS trapped by the post wall at Himatangi Beach are to be used in sand dune protection work.

Parks and Reserves Manager, Albert James, said some of the driftwood would act as barriers in front of exposed sand dunes that have suffered “blow-outs” from winter winds.

Contractors are shortly expected to remove the debris trapped by the post wall in the Kaikokopu Stream now that the whitebaiting season had finished.

The wall, hammered into place in May 2004, prevents logs and debris from the Whanganui and Rangitikei Rivers being swept upstream by incoming high tides.

Mr James said the sand dune “blow-outs” this winter had been the worst for a number of years.

“It’s a delicate area and it doesn’t take much for damage to occur. The situation isn’t helped with people walking through the blow-out or riding over the area on motor bikes.”

Mr James said once the barriers were put in place a planting programme of the sand-binding grass, spinifex, would be carried out in the autumn.

He said the post wall in the Kaikokopu Stream, near the Palmerston North Surf Life Saving Club building, had proved a success.

“The odd log still gets through, but it’s nothing compared to what was happening before the wall went up.”