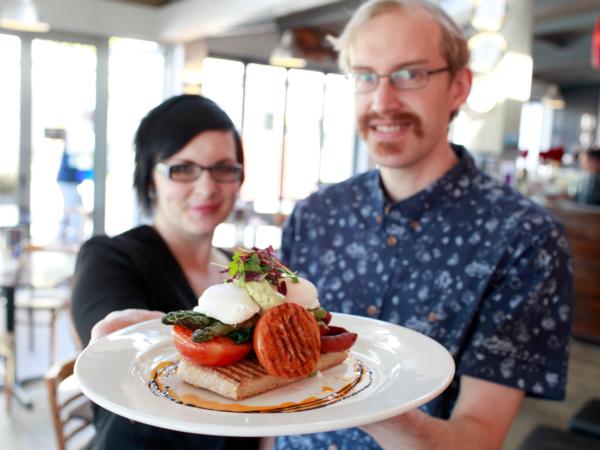 For the second year in a row a South Island café has been judged the nation’s best. Dunedin’s Ironic Café has taken out the Café of the Year title for 2014 from 18 finalists throughout New Zealand.

Ironic Café was built from scratch and is owned by Sue Moller and Steve Wilson who opened it in 2007. For their win, in addition to the kudos of running the country’s best café, Sue and Steve drive home a sporty Renault Clio R.S. 200 worth more than $30,000.

Head judge Kerry Tyack says Ironic is “a truly delightful and well managed café propelled in to the winners’ circle by its loyal customers”.

“Ironic has it all; a busy, upbeat atmosphere, great staff ably led by the owner determined to make your visit enjoyable, an extensive selection of cabinet food to tempt you as well as superb coffee.

“You can just pop in and grab something to take away or you can sit and linger, inside or out, read the paper or a magazine while soaking up the ambience in an environment that epitomises New Zealand’s burgeoning café culture.”

Marisa Bidois, CEO of The Restaurant Association of New Zealand says with record entries this year the competition has been tough.

“The café culture is such an important part of our ethos here in New Zealand and it’s wonderful to see such a diverse representation in the finalists. A big congratulations to our deserving winners.”

The Dunedin café fought off challenges from regional winners in Auckland, the Upper North Island, Lower North Island, Wellington and Christchurch as well as cafés from the wider South Island.

The competition is now in its third year and more than 39,000 café lovers across six regions voted for the 1,123 eateries that entered – 454 more than in 2013. Entrants needed to create a dish to feature on their menus comprising at least one of a specified range of Wattie’s and Meadow Fresh products.

Last year’s overall winner was The Jester House Café in Nelson. The regional winners for Café of the year 2014 are:

South Island
The South Island’s other finalists were Rhubarb from Dunedin and Jester House Café, Tasman which was overall winner of the Café of the Year 2013.

Judging of New Zealand Café of the Year involves a rigorous assessment of each café with the process comprising three tiers of judging, a hallmark of the competition.

Judges are looking for a combination of stylish ambience, a warm welcome, attentive service as well as appetising and satisfying food and drink. Overlaying all this is a conscious celebration of the entrant’s region, its produce and any features that make it special. There also needs to be clear evidence of the wow factor that keeps happy customers coming back to the café.

The finals judges include people from The Restaurant Association of New Zealand as well as a number of independent food writers and hospitality industry professionals. They began their deliberations in late October visiting each café incognito until 24 November. The winners in each region and the overall NZ Café of the Year winner for 2014 are announced today (Dec. 4).

The award is organised by The Restaurant Association of New Zealand and supported by Heinz Wattie’s, Goodman Fielder and Renault.

About Café of the Year
Café of the Year was launched by the Image Centre Group in 2012. More than 400 entries were received nationwide in the first year and 660 in 2013. Regions are Upper North Island (from Taupo north, excluding Auckland), Urban Auckland (Orewa to Papakura), Lower North Island (South of Taupo), Wellington, Christchurch and South Island Regions. Nelson’s Jester House Café won the 2013 title.  Runner up was Black Cottage Café in Coatesville north of Auckland.

About Image Centre Group
Auckland-based Image Centre Group (ICG) is a diversified communications business with interests in printing, retail advertising, digital communications, video production and publishing.  Founded in 1989 as a pre-press provider, ICG now employs more than 200 New Zealanders across eight brands with one vision – to satisfy the brand or communications strategies of all its customers.  Full info at www.image-centre.com.