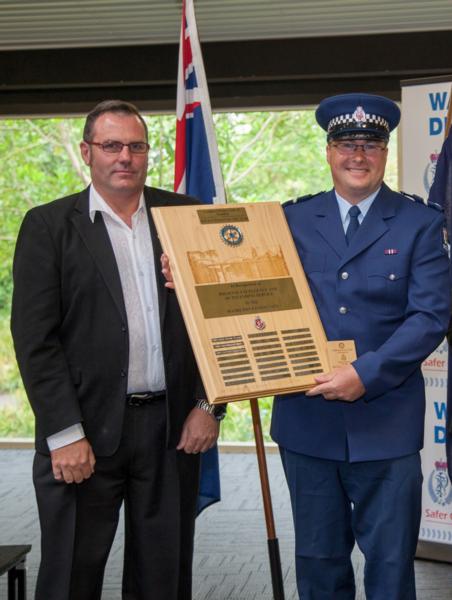 'Hamilton Police Person of the Year 2014'

Senior Constable Stephen Leet, based at Hamilton Central, is the recipient of the 2014 Combined Rotary Clubs of Hamilton, ‘Police Person of the Year’ Award.

Rotary Assistant Governor Keith Small made the presentation to Senior Constable Leet at the Waikato Police District Pay Parade Ceremony, which was held at the Central Court Pavilion of Hamilton Gardens on Friday 5th December.

The ceremony was attended by Police Commissioner Mike Bush, who inspected the parade and presented many of the awards. Also attending were many civic dignitaries, senior police officers, representatives from the city Rotary clubs and many police families and their friends.

Senior Constable Leet has been recognised for his work as a Police Prosecutor within the Te Kooti Rangatahi (Youth Court), which sits at the Kirikiriroa Marae.

Senior Constable Leet’s high level of cultural competency was particularly singled out by community members who noted that his enthusiasm and caring nature have allowed him to calmly and respectfully manage his responsibility within the Te Kooti Rangatahi (Youth Court).

One nominator said “Through his kindness, understanding and humanity Stephen has contributed in no small to changing attitudes toward the Police by youth and their whanau”.

Fairfield Rotary Club president Michael Cahill, this year’s award coordinator, was impressed by the community response to this year’s award, “courtesy, kindness, understanding, compassion, courage and devotion to duty are all qualities that the community expects of its police officers and these qualities were certainly reflected in the nominations,” Mr Cahill says. “However, there can only be one award recipient for the year, and I congratulate Senior Constable Leet on his much deserved success.”

As well as receiving the Combined Rotary Clubs of Hamilton ‘Police Person of the Year’ Award, Senior Constable Leet will also be given a cheque to the value of $500 which he gets to donate to a charity of his choice.